The disappointment of TARAS BULBA 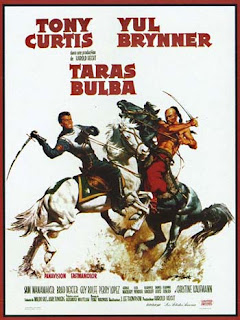 From: YUL
The Man Who Would Be King
A Memoir of Father and Son
by Rock Brynner
The notion of filming Gogol's classic TARAS BULBA had occurred to Yul years before. Now he approached the historian and novelist Howard Fast to write the screenplay. Fast, however, could not bring himself to overlook the historical reality that the victims of Taras Bulba's cossack army were Polish Jews. Yul could overlook that fact, in order to tell the story of a father who destroys his greatest treasure: his own son.
Eventually Waldo Salt and Karl Tunberg wrote the screenplay for producer Harold Hecht, with J. Lee Thompson directing. The relationship of father and son was usually central to Yul's films, and there was a reason for this paternal aspect to his image: he often played authoritarian characters. This sweeping epic that spans thirty years depicts the ultimate parable of authoritarianism, as a devoted father murders the beloved son who betrays him. Yul worked hard to create a rich, robust character for Taras, whom he described as a mythical figure. "In my mind he is fifteen feet tall, in order to make the things he does convincing. He has the facility to mesmerize his cossacks into doing what he wants them to do. He has a great love for his son. Taras has a peasant streak in him, but even though he kills Andrei, his son, for betraying the cossack cause, he learns something from Andrei. His world is changed, broadened, he places more value on people." At some considerable cost.
Yul wanted to track this character over the decades, to show how his idealistic nationalism exceeded his paternal instinct. He even proposed that the movie be filmed strictly in sequence - that way, when he was playing Taras as an old man, he could have the caps taken off his front teeth. There was never a film Yul cared about more, not even THE BROTHERS KARAMAZOV. It might have been a best performance he ever gave on the screen, but in the end that didn't even matter. TARAS BULBA turned out to be a terrible movie.
A lot of factors contributed to this bitter failure, including some stupid dialogue and the worst painted backdrops of medieval Poland you've ever seen. Yul's carefully crafted performance was edited without reference to the timing and emphasis that Yul and the director had planned in detail. Finally, the film was butchered in the editing room, to make it short enough to show on a double bill.
The single irrecoverable blow to the film was the casting of Tony Curtis as Yul's son, Andrei. Curtis had given a number of excellent performances in films such as THE DEFIANT ONES and THE SWEET SMELL OF SUCCESS. He had acquitted himself well in SPARTACUS. But in TARAS BULBA his performance just didn't work. Part of the problem was that, at the beginning of the story, Curtis had to play a teenager; in trying to summon up a childlike quality, he created a character who was only childish. And during the filming, he fell in love with his costar, Christine Kaufmann, and ended years of marriage to Janet Leigh. Not only was Tony Curtis in the film, on the movie marquee he was its star. For the first time in his career, Yul had accepted an extra hundread thousand or so to take second billing. Even though Yul was playing the title role, TARAS BULBA had become a Tony Curtis movie.
When Yul saw the final cut of TARAS BULBA, he wept. The end result was so far from his original dream as to be unrecognizable, and for several nights thereafter he hardly slept. There and then, once and for all, something inside him broke. His aesthetic trust had been violated, and no professional undertaking would ever be quite the same again.
"There's too much money, and there are too many idiots involved, Rock," he said late one night, sharing a beer with me. "I can't put my heart that far out on the line for an industry that no longer cares enough to be proud of the result. They're hacks, just earning a living. The cocksuckers ought to be parking cars - instead they're calling the shots for the whole film business.
"Well, to hell with it. From here on in, I'm just there for the money, like everyone else. I can't go on being the only one who cares. I'll just pick up my check and go on my way. A great performance in a lousy picture is not going to get seen by anybody...
"But, as the star, I can't ensure the quality of a film. And, because of the editing process, I can't even ensure the quality of my own performance. From now on, that's all they're going to get from me. No script revisions, no directorial help. Fuck 'em-"
"And the horse they rode in on. Right, Dad?"
"That's the spirit, son."
Posted by William Connolly at 12:45 PM