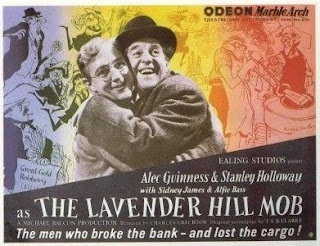 From: MY NAME ESCAPES ME
by Alec Guinness
Monday 6 May (1996)
THE LAVENDER HILL MOB is being shown on TV this evening but I won't be watching it. (If only I had received 1 [pound] each time one of the Ealing comedies was shown I would be a rich man. My contract didn't cover mechanical reproduction.) It was a good film, I think; well over forty years old now and mercifully it only lasted an hour and a half. Stanley Holloway and I got on exceedingly well and became good friends. He was always genial, easy-going and meticulously professional.
Ealing Studios never succeeded in killing me in spite of some quite good tries, the first of which was during the making of LAVENDER HILL. Rehearsing a brief scene in which Stanley and I were required to escape from the top of the Eiffel Tower, the director (Charles Crichton) said, 'Alec, there is a trap door over there - where it says Workmen Only - I'd like you to run to it, open it and start running down the spiral staircase. Stanley will follow.' So I did as asked. A very dizzying sight to the ground greeted me. But I completed half a spiral before I noticed that three feet in front of me the steps suddenly ceased - broken off. I sat down promptly where I was and cautiously started to shift myself back to the top, warning Stanley to get out of the way.
'What the hell are you doing?' the director yelled. 'Down! Further down!'
'Further down is eternity,' I called back.
Stanley and I regained the panoramic view of Paris pale and shaking. No one had checked up on the staircase and no one apologized; that wasn't Ealing policy.
Posted by William Connolly at 9:18 AM No comments: 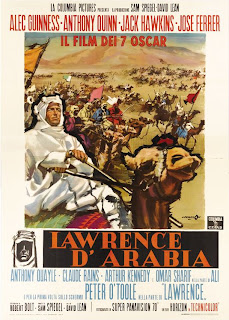 From: MY NAME ESCAPES ME
by Alec Guinness
Monday 19 February (1996)
This morning Matthew telephoned, having just got back from his skiing holiday in Bulgaria. He seems to have enjoyed it but found the meals fairly grim. He said his chalet was pleasant enough but he was puzzled by the showerbath, the floor of which was slanted so that water didn't go down the plug but sloshed into the bathroom. It sounds to me as if the Bulgarians have picked up a few tips from the Spanish. Tony Quayle and I, when filming LAWRENCE OF ARABIA, rented a wretched little guncrack house in Almeria for a few weeks. The only way of making the shower work was to sit on the loo, and the only chance of flushing the loo was to turn on the hot tap in the shower. The view from the front of the house was of mangy dogs rutting on a rubbish dump. I am told Almeria has greatly improved in recent years but I'm not going back.
Posted by William Connolly at 8:39 AM No comments: 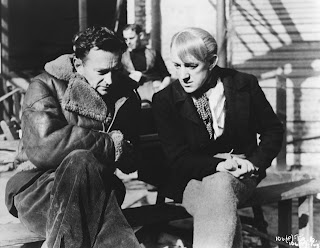 From: MY NAME ESCAPES ME
by Alec Guinness
The last time I was at St. Paul's was for David Lean's memorial service, which was a big production number, with a military band outside on the steps playing 'Colonel Bogey', as used in the film of THE BRIDGE ON THE RIVER KWAI. Inside it was film star studded, at least under the dome. I don't think people at the back were totally aware of what was going on or why. Compromise is my middle name so I sat myself between the two groups. Melvyn Bragg gave an admirable address, beautifully spoken; he managed to get in a snide remark of David's about me which caused a few discreet titters. The titterers were sitting, of course, directly under the Whispering Gallery. 'Titter you not!' as Frankie Howard used to say. I had to balance my thoughts as best I could, pushing aside my bad recollections of David's extreme unpleasantness in latter years but remembering the enchanting, affable, exciting man he was in the days of making GREAT EXPECTATIONS and OLIVER TWIST. He could still switch on the charm even in his last years but I had grown mistrustful of it. We each did our best, I think, to repair our damaged friendship but it didn't really work out. I needed someone with whom I could laugh (not David's strongest point) and he depended so much, it seemed to me, on sycophants. But he was marvellously generous with his riches. The car left St. Paul's behind in the failing light. I wished David eternal happiness, as I have always done since the day he died.
Posted by William Connolly at 9:08 PM No comments: