Shelley Winters on working with Tomas Milian and Claudia Cardinale

From SHELLEY II: THE MIDDLE OF MY CENTURY by Shelley Winters (1989) 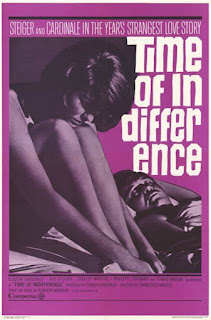 I had left Cages to do a film called TIME OF INDIFFERENCE in Italy. Adapted from a book by Alberto Moravia, it was a penetrating study of the rise of Fascism. A new hot young Italian director by the name of Francesco Maselli was to direct. It was being produced by a famous Italian producer, Franco Cristaldi. I, Rod Steiger, Claudia Cardinale, Paulette Goddard, and Tomas Milian were to star in it... 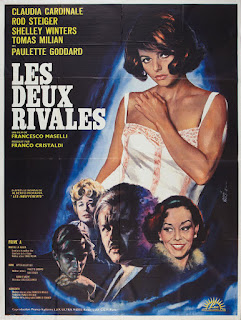 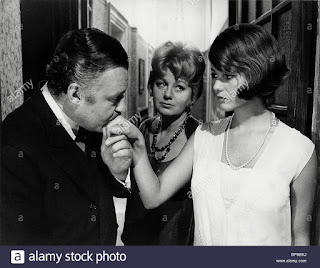 I had fittings with a famous Italian couturier, and the six costumes he made for me were gorgeous. Since I was playing a remittance woman, sort of Paulette Goddard's personal saleslady and cosmetologist, I couldn't understand why I was wearing these gorgeous clothes. TIME OF INDIFFERENCE was set in Italy in the middle thirties when the aristocracy and the rich were very rich and the poor were very, very poor. But these clothes were so classy and art decoish that I stifled my artistic truth and let the seamstresses work. They gave me these clothes after the filming and I have worn them in A PATCH OF BLUE, WILD IN THE STREETS, BLOODY MAMA, and a picture I recently completed called TOUCH OF A STRANGER. They have finally fallen apart, but the last was a black chiffon dress, bias cut a la Jean Harlow, with a white chiffon collar. It barely held together until the end of the filming. I wonder if Signore Cristaldi, the producer, or Signore Schubert knows that their wardrobe from TIME OF INDIFFERENCE was worn in several other American films. In fact, I wore one of these dresses, a black-and-white floral print, for the next decade, in A HOUSE IS NOT A HOME, HARPER, and DIAMONDS. In fact, the black-and-white print photographed in color kind of navy blue-and-white, so I insisted that Joe Levine, who produced HOUSE, rent me a real sapphire-and-diamond necklace, which I subsequently wore in all those films. After the many weeks of rental, Marvin Hime, jeweler to the stars, let me trade in my old diamond necklace and buy this one for a very few thousand dollars. Joe Levine, Paul Newman, and Menahem Golan don't know it, but they bought me a diamond necklace which I have worn to one Oscar-cast and a dinner for General Omar Bradley. Now it rests in the bank vault. 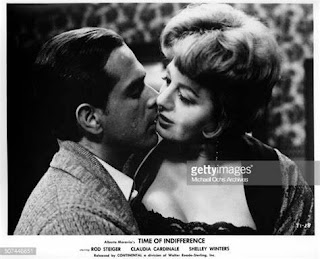 In those days, filming in Rome was more civilized than it was in Hollywood, or for that matter the way it is in Italy now. The studio car picked you up at nine. You drove to the set, you had a leisurely cappuccino while they made you up and then you reported for work about eleven or twelve o'clock. You acted till 1:00 P.M., had lunch until 4:00, slept or rested or whatever, and reported back to work until 8:00 P.M. Maybe the working hours are a little less than Hollywood, but I'm convinced they get more work done. When you get up at 5:00 A.M. and report for work at 6:00, you begin to fade after lunch and the afternoon seems endless. I hope that with the new independent spirit in Hollywood they will revert to Italian hours. 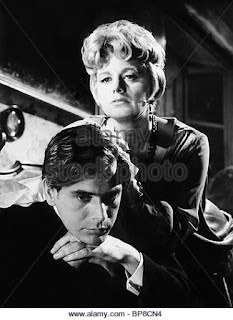 GLI INDIFFERENTI started in chaos and ended up in shambles. It seemed that the producer, Cristaldi, was making a film about a romance between Claudia Cardinale and Tomas Milian - and the director, Maselli, was making a political picture about the rise of Fascism. But this was sort of par for the Italian film scene in those days. Everyone in the film spoke a different language. Rod Steiger, Paulette Goddar and I sort of spoke English. Tomas Milian, who was Cuban, spoke Spanish, and Claudia Cardinale just made sounds. She had been born and raised in Tunisia, had spent a few years in Spain, and had arrived in Italy at eighteen. Of course, she was Cristaldi's girlfriend. That was the reason for the whole operation. 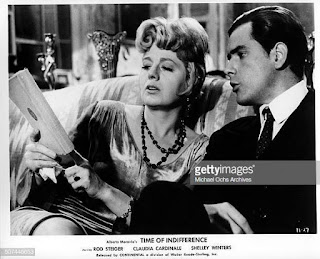 She was a lovely, sad girl, beautiful and quiet, rather stunned to find herself a "movie star." I once asked her why she always looked so unhappy. She smiled her Mona Lisa smile and said in some language, "That must be the mystique of female Italian movie stars. We must always appear to be suffering silently." 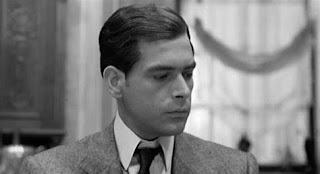 The film director, Francesco Maselli, barely spoke English and he had a British lady who was rather graying and spinsterish as his assistant and translator. The problem was, she had left England thirty years earlier, and during the thirties, forties, and fifties, the English language had changed. She spoke Italian like a native but her English was rather rusty. We were working from an Italian script but speaking our own languages since the film would be dubbed into the appropriate language of each country it was released in. There was such an ideological difference between the producer and the director that the words the actors spoke were being constantly changed and argued about. 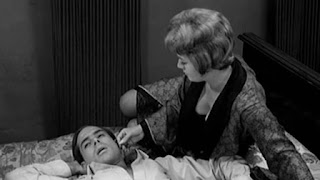 A couple of years later when this picture was to be released in America, Rod Steiger and I had to dub it into English. That meant speaking into a microphone while you watched your lips move on the screen and trying to sync the sound with your lips. When we got ready to do it, we found that Maselli had stolen the sound track and we had no guide track to copy. We finally had to get someone from the deaf-and-dumb institute to read our lips and tell us what we had said on the film. It is always rather difficult for me to dub because I hesitate when I speak naturally, and I have irregular breathing and speaking patterns. Dubbing INDIFFERENTI was a nightmare. In fact, shooting the whole film was a nightmare.
The only relief was Tomas Milian, and we became fast friends and I do mean friends. He had lived in New York for a while and he was a member of the Actors Studio before he emigrated to Rome. He was doing lots of artistic pictures in those days but since has become a big Italian TV star. He made a lot of money doing a series about an undercover cop and I don't think he longs for the stress of acting deeply anymore. I know I certainly don't. Well, I think I don't. 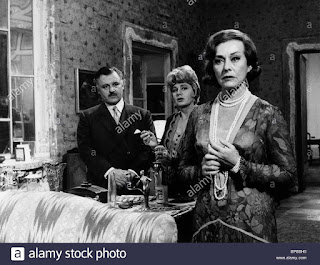 Sometime in the middle of the shooting of INDIFFERENTI, I finally realized that Maselli was trying to make an important anti-Fascist statement. The film took place during the period when Mussolini used the indifference and greediness of the Italian people to grab power and became the dictator who eventually destroyed Italy. All the nouveau riche characters in the film were politically apathetic and only cared about material possessions and didn't pay attention to or give a damn about what was happening around them - rather like the American society of the eighties.
I wondered why I, who usually research films so closely and often try to make a sociological or political statement with the role I am playing, had warded off the knowledge of what this film was really about. Perhaps it was because of the subtle blacklisting that was still going on in Hollywood.
I was attracted to the film and, on some unconscious level, afraid of it. When I faced this I began to help Maselli as much as I could. I stayed on the set and watched scenes that I wasn't involved in and translated for him into English as best I could what he had written in Italian. 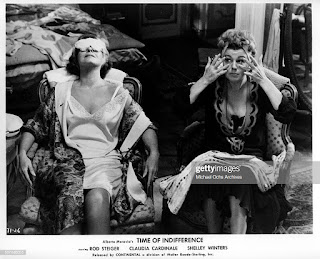 Why this film has never been shown on American TV to my knowledge puzzles me. Rod Steiger gave a powerful performance in it, and I think my scenes with Paulette Goddard were very funny. I remember one in which I was giving her a facial. I had worked with her in THE WOMEN and she had worn different sets of jewelry every day and she did the same in this film. It was rather difficult to get around her diamond necklaces while I was giving her neck and face a facial, but we had very amusing scenes together. She was indeed fun to work with in this film, rather zany, and she would tell me long, rambling stories about how stingy Charlie Chaplin was, ignoring the fact that she was the only woman in his history who got a lot of money and jewels from him. I told her about the open house on Sundays at Charlie and Oona's that I had gone to. She was amazed.
"I can't believe he spent money on food for strangers, talented or not," she said.
...Tomas Milian was giving an end-of-the-picture party for the cast. He had many beautiful antiques and statues in his apartment off the Piazza di Spange. There was a torso of a beautiful young man that he told me Visconti had given him. He told me that he wanted to present it to my daughter because I had helped the director, Maselli, and him with the film TIME OF INDIFFERENCE. The bust was very old and it was almost illegal to send it out of Italy because there was a new "preservation of antiquity" law that had been passed in Italy in 1960, but legally he could send it to my daughter because she was half-Italian.
The statue was two feet high and so lovely it looked as if Michelangelo or one of his students could have done it. It was hardly chipped and very, very valuable. He told me he would take it to Naples and put it on a boat and the forwarder in New York would notify me when to pick it up. I thanked him and kissed all the actors goodbye and told Tomas I would see him at the Actors Studio in a couple of months, when he was planning to come to New York.
Posted by William Connolly at 11:54 AM 2 comments: