Age and Scarpelli and Hitchcock 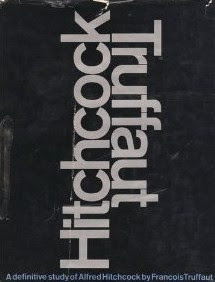 by Francois Truffaut
with the Collaboration of Helen G. Scott
[After MARINE, director Alfred Hitchcock considered three projects which were never made before he actually produced TORN CURTAIN. The projects were THE THREE HOSTAGES, MARY ROSE and R.R.R.R.]
F.T. Your third project is an original screenplay, which you assigned to the writing team of Age and Scarpelli, the writers of BIG DEAL ON MADONNA STREET.
A.H. That one I just now abandoned. Definitely. It was a story of an Italian who immigrates to America. He starts out as an elevator boy in a big hotel and eventually becomes the general manager. He brings his family over from Sicily. It turns out they are a gang of thieves, and he has to try to prevent them from stealing a collection of precious coins that are on display in the hotel. I dropped the project because it seemed to be shapeless. Aside from that, you know that Italians are very slipshod in matters of story construction. They just ramble on.
[Age and Scarpelli would soon go to work with Sergio Leone on IL BUONO, IL BRUTO, IL CATTIVO, aka THE GOOD THE BAD AND THE UGLY.]
Posted by William Connolly at 9:30 PM No comments: 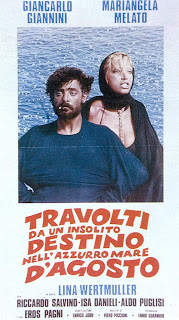 by Ernesto G. Laura
Similar is the case with Mariangela Melato and Giancarlo Giannini, who became popular in the movies thanks to the light comedies of Lina Wertmuller (in which they formed a pair) that are, however, impossible to confine exclusively to the comedy genre. Melato, born in Milan in 1945, has an intensely active background as a dramatic stage actress; Giannini, born in 1942, in La Spezia, in Liguria, but raised in Naples, was an outstanding Romeo in Franco Zeffirelli's 1964 production of ROMEO AND JULIET in Verona. Both first appeared in the movies in important roles, but not enough so for their artistic personalities to be immediately discerned.
A film by Ettore Scola represented the turning-point for Giancarlo Giannini, namely DRAMMA DELLA GELOSIA: TUTTI I PARTICOLARI IN CRONACA (DRAMA OF JEALOUSY: ALL DETAILS IN THE NEWS, 1970) based on the original idea of transferring a super-bourgeois love triangle to characters who are dirty and ragged outcasts, placing the emphasis on human sentiments. The disputed woman was Monica Vitti, Giannini's rival, Marcello Mastroianni. None of the three was a romantic "hero", the two men in particular seemed a little stupid, but it was precisely the disparity between the modest, indeed wretched reality and the lofty words of love uttered that gave rise to the humorousness of the film.
It was however the director Lina Wertmuller who turned Giannini into a reliable mainstay of Italian-style film comedy. MIMI METALLURGICO FERITO (METALLURGICAL MIMI, OFFENDED IN HIS HONOR: 1972) tells about another love triangle, but in a working-class environment, confirming the mimetic talents of Giannini who, starting off as a romantic matinee idol, comes up with flawless impersonations of proletarian figures, adapting himself to manners and dialects that are not his own, in this case Milanese. Mariangela Melato, in her interpretation of a certain kind of sentimental adn sharp-tongued Lombardy woman, strong-tempered, aggressive and caustic, seems to draw upon the heritage of one of the greatest actresses in the Milanese dialect theater, who in the '30s became a famous film comedy star: Dina Galli. Moving from Milan to Rome, Giannini and Melato were directed by Wertmuller in 1973 and in TRAVOLTI DA UN INSOLITO DESTINO NELL' AZZURO MARE D'AGOSTO (SWEPT AWAY BY AN UNCOMMON FATE IN THE BLUE SEA OF AUGUST) in 1974.
Giancarlo Giannini creates an extraordinary character in another Wertmuller film, PASQUALINO SETTEBELLEZZE (SEVEN BEAUTIES: 1975), where, shifting skillfully from the initial farce to tragedy, the story is told of a nondescript "guappo" (second-rate gangster in the local underworld) from Naples who ends up in a Nazi concentration camp. To introduce humor into such a serious subject was a risk which only a few people could pull off, as the director does through the use of a grotesque expressionistic style.
As to Melato, aside from completely dramatic films (DIMENTICARE VENEZIA, FORGET VENICE, by Brusati, GESU, JESUS, by Zeffirelli), mention may be made of her witty appearance as a hair-dresser in LA CLASSE OPERAIA VA IN PARADISO (THE WORKING CLASS GOES TO HEAVEN: 1971) by Elio Petri and in LA POLIZIOTTA (THE POLICEWOMAN), directed by Steno in 1974 on a script by Vincenzoni and Sergio Donati, where she was a woman policeman in a small town who dares to create trouble for the local powers that be, in agreement with a judge (Orazio Orlando).
At the beginning of the decade, 1980-1990, certain model which Italian-style comedy has lived on till now have run their course, like the so-called rosy neo-realism of the '50s. Several directors have passed away, others have changed their narrative style, sensitive to new tastes. The Comencini who in 1980 produced VOLTATI, EUGENIO (TURN AROUND, EUGENIO), a bitterish comedy about the break-down of relations between parents and childre, in which realistic accents are intermingled with symbolic imagery, time present and time past, even some surrealistic touches, is undoubtedly a far cry from the Comencini of 1952, who directed PANE, AMORE E FANTASIA (BREAD, LOVE AND FANTASY).
New directors, new script-writers, new actors have come to the fore; no limitations exist any more on the subjects to be handled. So comedy is in the process of revising and transforming its traditional image. In the new decade before us everything can be different, everything must be original.
Posted by William Connolly at 12:44 PM No comments: 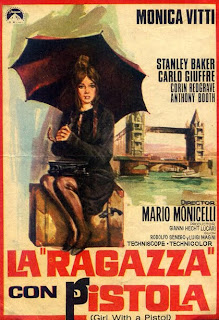 From: COMEDY ITALIAN STYLE
by Ernesto G. Laura
Other actors, some of them international stars, have not been taken into detailed consideration here because their comedy appearances fall into a larger and more complex framework of motion picture activities. Such is the case with Marcello Mastroianni and Monica Vitti. Both have important dramatic interpretations to their credit: suffice it to remember Michelangelo Antonioni's LA NOTTE (NIGHT), in which they appeared together. As to Mastroianni, mention must be made of the Fellini films, from LA DOLCE VITA (THE SWEET LIFE) to LA CITTA DELLA DONNE (CITY OF WOMEN), as to Vitti those of Antonioni, from L'AVVENTURA (THE ADVENTURE) to IL MISTERIO DI OBERWALD (THE MYSTERY OF OBERWALD). Even so, the former's natural inclination to irony, the latter's to caricature, often made it possible to introduce moments of genuine humor into dramatic films.
In the 1950s, Marcello Mastroianni was often one of the young leads in the humorous-sentimental comedies that were in fashion. He then reappears in Ferreri's LA GRANDE ABBUFFATA (THE BIG FEED) and in many more recent comedies (among other things, he starred in the musical comedy, VALENTINO, where in the role of the famous silent film star he danced and sang).
Monica Vitti, instead, appeared more regularly in the film comedy genre. Indeed, several films were made especially to show off her particular whimsical personality. For example, the movie versions of several successful stage works: TI HO SPOSATO PER ALLEGRIA (I MARRIED YOU OUT OF MIRTH: 1967) by Luciano Salce, on the play by Natalia Ginzburg, with Giorgio Albertazzi and Maria Grazia Buccella, L'ANATRA ALL'ARANCIA (DUCK A L'ORANGE: 1975), it too by Salce, from the play by Home and Sauvajon, adapted to the screen by Bernardino Zapponi, with Ugo Tognazzi, John Richardson and Barbara Bouchet, AMORI MIEI (MY DARLINGS: 1978) by Steno, from the play by Jaja Fiastri, with Dorelli and Enrico Maria Salerno, NON TI CONOSCO PIU AMORE (DON'T KNOW YOU ANYMORE, DARLING: 1980) by Corbucci, from an old play by Aldo De Benedetti which had already been made into a film in 1936 at the time of the "white telephone" comedies. The film which revealed most completely the gifts of Monica Vitti, a modern actress who even so identifies herself with the character emotionally, from within, was LA RAGAZZA CON LA PISTOLA (THE GIRL WITH THE PISTOL), directed in 1968 by Mario Monicelli from a story by Sonego adapted to the screen by Sonego and Magni. She is a farm girl from a small Southern town with a very closed mentality, who is "dishonored" by a local boy and goes looking for him in America to kill him and "wash away the disgrace," imagining at every stage of the journey the different ways the execution will take place. Vitti is extraordinary in depicting the various stages in the evolution of the girl, who, as the journey proceeds and she gains new experience, gradually begins to feel less and less disposed to carry out the ritual murder, more a woman, more modern, more mature.
Posted by William Connolly at 2:46 PM No comments: