FULL SERVICE, My Adventures In Hollywood And The Secret Sex Lives Of The Stars 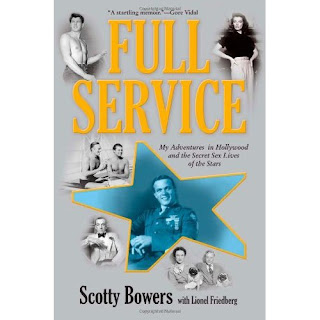 FULL SERVICE by Scotty Bowers with Lionel Friedberg is a very entertaining memoir about a Mid-Western farmboy who was introduced to sex by a friendly neighboring father as a pre-adolescent and when the circumstances of the Depression moved his single parent family to Chicago, found that men, including priests, would augment the money he made from delivering newspapers and shining shoes inorder to fondle him. Bowers never complained about or begrudged anyone who wanted to have sex with him, and was quite pleasantly surprised to discover that he had reached adolescence when he ejaculated for the first time while a fellow was giving him oral sex. Later on, when another fellow paid him to have sex with the fellow's wife, he discovered that while sex with men was fine, sex with women was preferable. World War 2 happened and Bowers joined the Marines. On leave in Southern California, Bowers had his first experience of life in Hollywood. He liked it so much he decided to move there after the war - which included being among the first ashore during the Battle of Iwo Jima - where his younger brother was killed. Discharged in Seattle, Washington, where he met a young woman who became a life-long companion (and mother of his daughter) though they never married, Bowers moved to Hollywood and got work at a gas station on Hollywood Blvd. At the gas station, he had his first experience of being picked up by a movie star who gave him $20 for "a trick". Never using the words "whore", "gigolo", "hustler" or "prostitute", Bowers would get paid for "tricks" by "tricks", or find friends interested in "tricking". Insisting that he never took money for introducing "tricks" to people he knew who were interesting in "tricking", Bowers became the go-to guy for not only movie people but others in the know who were looking for uncomplicated sex. Tennessee Williams wanted to write a book about Bowers, saying that he was the fairy godmother for gay sex in Hollywood, but Bowers objected to being portrayed as a queen and got Williams to promise to never publish what he wrote. When the L.A. Vice Squad began to notice all of the late night activity at the gas station, Bowers quit to begin a career as a waiter and bartender at private parties. At such a party, he met Dr. Alfred Kinsey, who had just created a thunderstorm of controversy with the publication of SEXUAL BEHAVIOR IN THE HUMAN MALE. Kinsey complained of not being able to find women willing to talk about their sex lives, and Bowers told him that he could help. And so Bowers became an uncredited research assistant on SEXUAL BEHAVIOR IN THE HUMAN FEMALE.

The advent of AIDS ended "tricking" for Bowers, and now in his 80s, he decided to tell his story and related some of the show business stories that he knew.

There are three myths which Bowers destroys in his book: 1) that Spencer Tracy and Katharine Hepburn were lovers, 2) that King Edward the Eighth abdicated the throne for the love of Wallis Simpson, and 3) that Clark Gable got George Cukor fired from directing GONE WITH THE WIND.
Posted by William Connolly at 1:36 PM 4 comments: