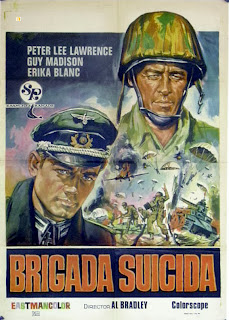 Most of this film, especially the battle scenes, take place at night and the poor transfer on Mogul Video makes it almost impossible to see what is going on. Seeing Peter Lee Lawrence, Guy Madison and Helga Line working has value, but none of them look good with this material. The music is from the C.A.M. library and is not memorable.
Posted by William Connolly at 9:12 PM 1 comment: