Woody and an unhappy Sergio Leone 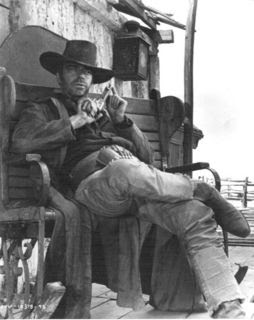 From: GOAL DUST
by Woody Strode and Sam Young
Then he confided in me, "Woody, this is my last western."
"Why"
"Because they call them spaghetti westerns." Sergio Leone was terribly insulted by that. See, Sergio loved the West just like John Ford. When you see the accuracy of the sets, the costumes and the props, it was classic. And Sergio was a big fan of John Ford, although he wasn't a tough guy like Ford. Sergio was a typical Italian, very warm and emotional. But to show you his respect for John Ford, I found this review of ONCE UPON A TIME IN THE WEST in the Hollywood Reporter.
[The] Director has stopped playing celluloid "variations" on westerns, and now appears desirous to become a straight oater filmmaker, a sort of Giovanni Ford. This means Leone's own special talent for playing with film ideas gets lost in no man's land of the merely imitative.
Now there's no sense in explaining the film because Jack Elam and I get gunned down and killed in the opening scene. What happens is, we arrive at a little train station out in the middle of nowhere. The audience doesn't know what we're up to. Jack Elam takes a seat on the platform, and I set up about a hundred yards away under the water tower that feeds the trains. When the train arrives, we regroup. We're standing there and nobody gets off the train. The train pulls out and when it clears the station, it uncovers Charles Bronson standing on the other side. We pull our guns, and Charlie kills us.
Posted by William Connolly at 7:01 AM