A birth certificate for Anthony Quinn 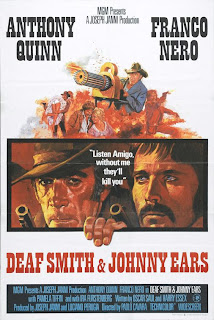 From: MADE IN HOLLYWOOD
by James Bacon
Tony Quinn the Irishman
Somehow you don't think of Anthony Quinn as half-Irish, even though Quinn is his real name. But he is.
Amazingly, Tony has more believers in Ireland than he does south of the border.
"I once went over to Cork to visit my grandfather's birthplace and I was received royally as an Irishman. I also found out I looked Irish. There's lots of Irishmen who look like me."
There's a historic reason for that. When the English fleet sunk the Spanish Armada back in the time of Queen Elizabeth, the Spanish sailors who escaped to the Irish shore were hid by the Catholic Irish. Eventually they married the Celtic colleens and that's why you have Spanish-sounding names in the West of Ireland (Costello is a prime example). It's also the origin of the term Black Irish.
In Mexico, the land of his birth, Tony always got the pocho treatment, the derogatory term for Mexicans who are gringoized.
"When I made a picture down in Durango, the people accused me ot being born in America - and called me a phony Mexican. Finally, the governor of Chihuahua happened to visit the set. He said he always admired me on the screen and asked if there was anything he could do for me.
"I said: 'Yes, for God's sake, get me a birth certificate.' I was born in Chihuahua during the Revolution and no one had time for recording births in those days.
"The governor went back home and talked with people who remembered my Mexican mother and my Irish father and when I was born.
"So, at age fifty-one, I was issued a birth certificate. If he hadn't gotten it for me, I know I could have gotten one in Cork that would have made me Irish."
Tony is the hardest-working actor I know. He's always working, so much so that he often is in competition with himself on the screen. He's also one of the best. He holds the record of winning an Oscar for the smallest role - little more than a big part. In LUST FOR LIFE, the story of Vincent Van Gogh, Tony was only on the screen for seven minutes, but he made that brief stint pay off with an Academy Award for best supporting actor.
No one gets deeper in the part than Tony. We have been friends for thirty years, but when I visited him in Rome during SHOES OF THE FISHERMAN, in which he played the Pope, he kept calling me "My son," even in his dressing room.
I'll never forget the first day I walked on that set at Cinecitta studios outside Rome. It was a replica of the Pope's balcony in the Vatican and Tony was imparting a pontifical blessing on the imaginary throng below in St. Peter's piazza.
Except for one thing - the people below were Italian grips and studio laborers on the soundstage. Tony was so convincing that the devout among them were crossing themselves, forgetting they were looking at a Mexican-Irish actor and not Pope John.
Few people know that Tony was a special protege of John Barrymore in that great actor's last days in Hollywood. Tony was so impressed with Barrymore that he once tried to match him drink for drink one night.
If you think that the Barrymore-Quinn relationship is something dreamed up by me, read Gene Fowler's classic THE MINUTES OF THE LAST MEETING and you'll find Tony's name in there with Barrymore, W.C. Fields, and the rest.
"I was only nineteen at the time and I survived because of my youth," says Tony.
Despite Barrymore's keen perception of Tony's talent, he played mostly Indians or Latin gigolos in his early days. Even the fact that he was Cecil B. DeMille's son-in-law then didn't help matters much. C.B. cast him as an Indian in THE PLAINSMAN.
Tony was bursting with pride and ambition in those days. One day on location during the lunch break, C.B. invited his son-in-law to lunch with him privately in the great director's tent.
The next day, a columnist wrote: "Anthony Quinn is too big to eat with the other actors on the location of THE PLAINSMAN, he eats his meals with C.B. DeMille himself."
For some strange reason this item upset Tony enormously. He began avoiding DeMille and eventually it led to an estrangement between the actor and his father-in-law.
Worse, in the early days of television, during the heyday of Hopalong Cassidy and Davy Crockett, Tony was offered a $1 million dollar contract to do an Indian series on TV. He could have used the money but he turned it down.
"The sons of bitches wanted me to play a Mohawk and keep my head permanently shaved, Mohawk-style. Worse, the contract stipulated that I could never appear in public unless me, my wife, and children appeared as the last of the Mohicans."
That offer, from a breakfast cereal company, drove Tony to Europe, where he became one of the all-time great actors.
Tony is the only person I know who has his footprints in the forecourt of Grauman's Chinese theater - the same theater where once he was turned down for a job as usher.
"The guy who was hiring ushers said I looked too Mexican to work in a Chinese theater."
Posted by William Connolly at 9:47 AM