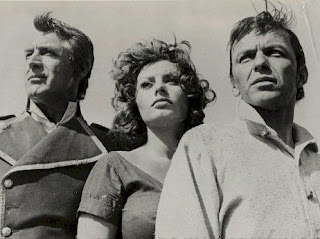 From: HOLLYWOOD IS A FOUR LETTER TOWN
by James Bacon
Sophia Loren today speaks English like a British duchess, but there was time when she had Frank Sinatra as teacher and she spoke English that would have made George Burns blush.
I met Sophia when she first arrived in this country on a polar prop flight that took twenty-seven hours to make it from Europe. As an opening remark, I asked her how the flight was.
"It was a fucking gas," said Sophia.
Then one day after she had been here awhile, I heard her say to Carlo Ponti, later to become her husband: "Hey, Carlo, how's your cock?"
She would deliver these four-letter words with such innocence that you could see immediately that she didn't have the slightest idea what they meant. I finally found out why. When she had done THE PRIDE AND THE PASSION in Spain, Sinatra had taken charge of her English lessons. He told her that "fuck" was a form of endearment in the English idiom; that she should use it as much as possible. And "How's your cock" was the same.
I gave Sophia a little English lesson myself and told her she should have taken lessons from Cary Grant instead of the incorrigible Frank.
Posted by William Connolly at 11:19 AM

Labels: Sophia Loren, THE PRIDE AND THE PASSION