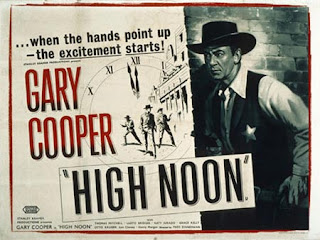 From: HOLLYWOOD IS A FOUR LETTER TOWN
by James Bacon
Whenever there is talk about Hollywood's classic westerns, the name HIGH NOON always comes up. But did you know that when HIGH NOON was first sneaked in Riverside, it was one of the great disasters of all time? It was so bad that even the producer, Stanley Kramer, wanted to forget about it.
I know because I saw that first sneak. The picture was way too long because the director had a crush on a new actress by the name of Grace Kelly. About half the picture was close-ups of Grace. She may not have known that Fred Zinnemann was in love with her but that's the word of Elmo Williams, now a producer, in those days a cutter. Elmo won the Oscar for editing HIGH NOON.
The original version stressed the love story between Grace and Gary Cooper - a co-plot with the tale of the killers arriving in town to kill the brave sheriff. But those close-ups of the future princess were too much. Incidentally, whenever you see a preponderance of close-ups in a movie you can always be sure that the director is in love with the star.
In was a depressed bunch who came back from that sneak in Riverside. One other major fault of the movie was Cooper's ulcer. It kept burping in key scenes. I had been on the set at the Columbia ranch in 1951 during the making of the movie. Coop told me his ulcer had been giving him unusual trouble.
"Jesus, I don't know whether I'll make it through the picture," he said one day over a glass of tequila at the China Trader, a restaurant near the ranch in Burbank.
As I say, Kramer was so disgusted that he was all for writing off the movie. You would be amazed to learn how many movies made are never released. Elmo the cutter begged to have one weekend with the movie, a request that was granted.
"I worked night and day for the whole weekend cutting that movie. I took out most of the love story and about 99 percent of the close-ups of Grace," Elmo recalls. "I confined the action of the movie to the actual hour of high noon. There were shots of the town clock. I inserted more, ticking off the time.
"As the picture was cut, I could see that Coop's ulcer, a liability in the love scenes, was a huge asset in the suspense. Three killers were out to kill Coop and he was getting no help from the townspeople. It was terrifying situation and the burp only accented his terror.
"Towards the end of the weekend, I knew I had a good movie. I also had a short movie. There was no exposition of the plot. I hit upon the idea of putting a song in front and over the titles. It had never been done before. I tested it with a recording of Vaughan Monroe singing 'Ghost Riders in the Sky.' That was just temporary until I could get a song in there. On Monday I talked with composers Ned Washington and Dimitri Tiomkin and told them that I needed a song that would both set the mood and also tell the plot before the picture got started. They came up with 'The Ballad of High Noon.'"
Now, if you listen to that song even today, you don't have to see the movie to know what it's all about. The whole plot is in the song. Elmo said that he knew just the right voice to sing it - that of the old cowboy star Tex Ritter, who wasn't doing too well at that time. Tex jumped at the chance to sing the song.
George Glass, who was a member of the Kramer company at the time, says that it was Kramer who inserted the close-ups of Cooper and his ulcer and the town clock. "Stanley took over the final editing," says George, "giving the movie the sense of urgency that made it, especially the inserts of the town clock."
And Carl Foreman, the writer, says that Coop's not accepting credit for his acting was due to "Coop's characteristic modesty." It's true that Coop would downgrade even an Oscar, but I saw him right after he won it and this was his aside to me: "First time in the history of the Academy an ulcer ever won an Oscar."
As for the editing, I believe Elmo's version. After all, he won the Oscar that year. And the other editors who do the voting know who did the work. I am sure that Kramer oversaw Elmo's work and heartily approved. Who wouldn't approve a cutter who had turned disaster into triumph?
Whatever happened, it is still one hell of a picture. And now you know why studios have sneak previews. Only the audience can make a hit.
[You'll notice that Bacon doesn't mention the fact that Carl Foreman was also the producer of this picture and left early to move to England because of the House Committee Un-American Activities "Hollywood Red Scare". Foreman's producer credit was taken off the picture.]
Posted by William Connolly at 1:18 PM