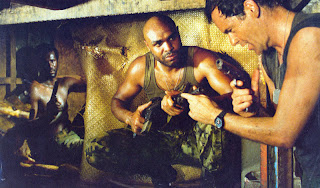 David Warbeck
The Man and his Movies
David Warbeck was interviewed by Jason J. Slater with the assistance of Harvey Fenton, Julian Grainger and Michelle Perks. The interviews were transcribed by Matt Pelton

Q: What about Bobby Rhodes?
Ah! Now Bobby Rhodes, he's an absolute sweetheart. He's an Italian black.
Q: Really? Does he speak English?
Oh, he speaks very good English. I bumped into him outside the railway station not so long ago. Great big guy.
Q: He's massive isn't he? Looks like a killer!
He's a pussycat, he's so sweet.
Q: He's always in Margheriti's films... And he recently made that Western with Castellari, JONATHAN OF THE BEARS. He's dressed just in white and he's big and powerful, on a horse, shiny black head. He looks so imposing.
Oh he's a sweet guy. He knows what to do and he's so modest, almost embarrassed all the time and quiet and gentle.
Posted by William Connolly at 2:00 PM