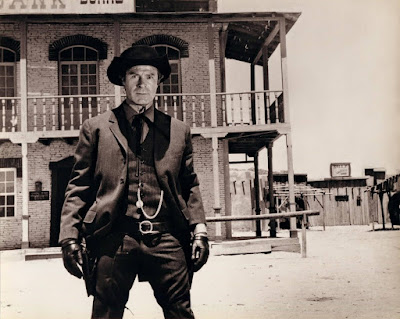 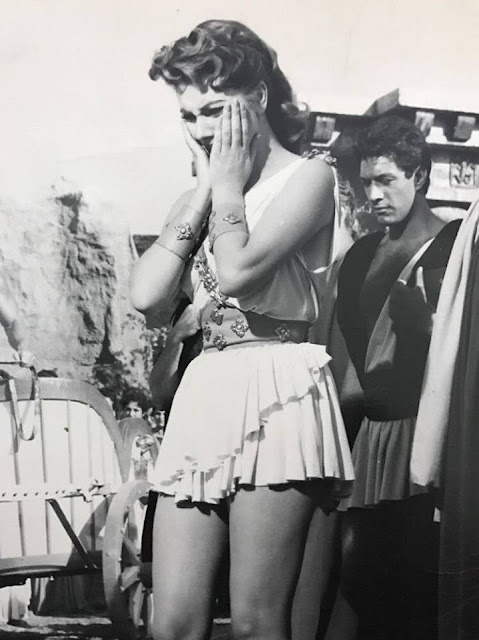 Charles Gilbert identified last week's frame grab of Piero Lulli and Erno Crisa in MACISTE L'EROE PIU GRANDE DEL MONDO, aka GOLIATH AND THE SINS OF BABYLON.
Above is a new photo.
Can you name from what movie it came? 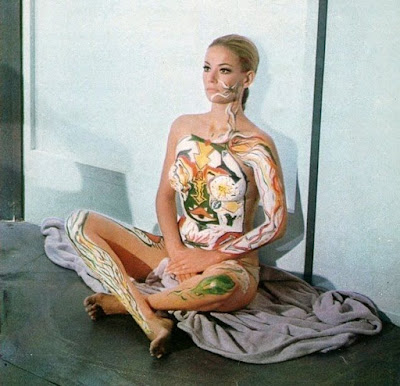 George Grimes identified last week's photo of Philippe Leroy and Delia Boccardo in L'OCCHIO SELVAGGIO, aka THE WILD EYE.
Above is a new photo.
Can you name from what movie it came?

George Grimes identified last week's photo of  Kristy Yeung and Shinichi Chiba in THE STORM RIDERS.
Above is a new photo.
Can you name from what movie it came?

STAR OF MIDNIGHT (1935) - William Powell and Ginger Rogers co-star in this version of Arthur Somers Roche's mystery novel. It's not quite THE THIN MAN, but it's fun.

We Never Sleep (1956) - A RKO-Pathe Screenliner 8 minute documentary about the Pinkerton Agency.

RED SUNDOWN (1956) - There are some nice bits in this Jack Arnold directed Western which even features Lee Van Cleef getting gunned down in a Black and White flashback. The ending is irritating though.

The Name of the Game: "LA 2017" (1971) - Science Fiction writer Philip Wylie penned this tale in which series regular Gene Barry imagines himself in a future where pollution has made it impossible to live on the surface of the Earth.

PRISONERS OF THE SUN, aka BLOOD OATH (1990) - This was Russell Crowe's feature film debut, but Bryan Brown was the star in this dramatization of the Australian war crimes trial against the Japanese who ran the prisoner of war camp on Ambon in Indonesia, 1945. George Takei played the Japanese commander of the island on trial. Terry O'Quinn played an American major observing for the war crimes tribunal to be held later on the mainland. Deborah Unger played a nurse caring for the camp's survivors. Ray Barrett, who starred in THE REPTILE for Hammer Films, appeared as the President of the Trial. Stephen Wallace directed. Two years later Wallace directed the excellent TURTLE BEACH.

RAILS INTO LARAMIE (1954) - John Payne plays a two-fisted Army sergeant in 1869 who is ordered to figure out why the railroad work outside Laramie, Wyoming isn't progressing. Dan Duryea, with gunman Lee Van Cleef, is responsible, and even though he's an old friend of Payne's, he can't defeat our hero. In order to convict the villain of murder, a jury of twelve women is convened. As usual, our hero is faced with the choice of two women - a "good" woman, who is the wife of the villain, and a "bad" woman, the co-owner of the saloon. It turns out that the "bad" woman, played by Mari Blanchard, is actually the heroine and wins in the end.

DAY THE WORLD ENDED (1955) - This was the first science fiction produced and directed by Roger Corman.

KING DINOSAUR (1955) - A planet moves into our solar system, near enough to Earth to allow a team of American scientists - two men and two women - to rocket over to investigate. As the planet has moved into an orbit similar to Earth's, it turns out to have a biology quite similar to Earth. The scientists theorize that the planet is young, so, of course, it has a dinosaur - played by an iguana in closeup. This was Bert I Gordon's first film as a director, and it features the sort-of cheap special effects that would become his trademark. It is hard to believe that Tom Gries wrote this inane script. Finding an island with aggressive animals, the scientists plant an A-Bomb, allowing the filmmakers to end the film with lingering shots of a nuclear explosion.

RHINO! (1964) - Ivan Tors became famous for movies and television shows involving animals - FLIPPER being the most successful. Like Merian C. Cooper, Tors realized that his wildlife films needed actors to engage audiences, and here we've got Robert Culp as a preservationist seeking to rescue a pair of rhinoceros from poachers and relocate them to a game preserve. Local nurse Shirley Eaton recommends Harry Guardino as a guide, hoping that working with Culp will rehabilitate him from being a poacher. After multiple reversals, Guardino does throw in with Culp and they save the Rhino!

REVENGE OF THE CREATURE (1955) - Clint Eastwood made his film debut in a small bit for this unofficial remake of KING KONG. Jack Arnold directed this dull flick.

THE CREATURE WALKS AMONG US (1956) - John Sherwood came in to direct the final installment of the CREATURE FROM THE BLACK LAGOON trilogy.

MEXICAN SPITFIRE (1940) - Lupe Velez marries Donald Woods, but Linda Hayes connives to bust up the marriage. Everything ends with a food fight.

SMARTEST GIRL IN TOWN (1936) - Ann Southern is a model who wants to marry a rich man. Gene Raymond is a rich man that she mistakes as a penniless male model. Raymond goes to ridiculous lengths to get Southern's attention.

THE SAINT'S VACATION (1941) - Hugh Sinclair plays Simon Templar in episode 7 of the 9 film series made by the RKO British unit. Sally Gray plays Mary Langdon, a reporter chasing Templar around Europe to get the story. Cecil Parker plays the villain reminding viewers of the much better THE LADY VANISHES, as does the scenes on board a train. Felix Aylmer also makes an appearance in the final scene.

LA TRAVIATA (2018) - I didn't like this story when it was the movie CAMILLE starring Greta Garbo, and I like it even less when it is a two hour plus opera. This was the production given by the Metropolitan Opera of New York on December 5, 2018. There are few arias that I enjoy, but the opening instrumental music here is marvelous.

THE BRAIN THAT WOULDN'T DIE (1959) - This seemed to have been made around the same time that the German film DIE NACKTE UND DER SATAN, aka THE HEAD, was made. In 1966, the British film THE FROZEN DEAD did the idea better than both.

DEAD MEN WALK (1943) - George Zucco plays twin brothers in this PRC production. One is a good man, who murders his Satan-worshiping brother. Two is the murdered Satan-worshiping brother who comes back as a vampire for revenge. The vampire's revenge originally is to slowly suck the life out of the good doctor's niece, but her fiance helps the good doctor in stopping that. Figuring that the bad twin's hunchback assistant, played by Dwight Frye, has hidden the vampire's coffin in his house, the good twin seeks to end the evil. Seeing the evil twin murder a man, a townsman incites a mob to go after the good twin. Eventually, everyone sees the twins battling it out in the hunchback's burning house and good triumphs over evil at the cost of the good man's life. Director Sam Newfield worked on two Hammer films in 1952: THE GAMBLER AND THE LADY and LADY IN THE FOG (aka SCOTLAND YARD INSPECTOR).

THE SCARLETT BARONESS (59) - From 2015: "An old fave that holds up.  Joachim Fuchsberger and Dawn Addams in a WWII spy story.  Similar milieu to the Edgar Wallace films that would kick off the same year."

THE HAPPY PRINCE (18) - Rupert Everett wrote, directed, and starred in this biopic of Oscar Wilde, from his time in prison to the end of his life.  Plenty of flashbacks fill in the gaps.  Very impressive in all departments, including the lead performance.  Highly recommended.

THE MUMMY'S GHOST (1944) B&W. My favorite of the Universal series largely because of the introduction of the Princess Ananka and Ramsey Ames.

THE HISTORY OF TARZAN (1996) Rob Weller narrates this film composition covering the life of Edgar Rice Burroughs and the media phenomena that his titular character has remained for a century.