Charles Gilbert asks, "In which Mario Caiano gladiator flick does tavern owner Peter White offer to fix boiled turnips and stuffed turnips stuffed with more turnips?"
It was I DUE GLADIATORI, aka THE TWO GLADIATORS. Peter White is aka Adriano Micantoni.

Which American actor who made an Italian Western appeared in an American crime flick in which he pretends to be an hobo in order to trick a college student into murdering a young woman's uncle?
No one has answered this question yet.

Which Italian actor, celebrated for his Hamlet, starred in a  movie set during the Mexican revolution?
No one has answered this question yet.

Which Italian Western star was a descendant of the man who signed the death warrant for King Charles I of England?
Rick Garibaldi knew that it was Richard Wyler, aka Richard Stapley.

Which Italian actor was born in Novellara, Italy on January 10, 1927?
George Grimes knew that it was Luciano Pigozzi, aka Alan Collins.

Which Italian actor opinioned in an interview that Richard Harrison ruined himself with women?
No one has answered this question yet.

In which Italian Spy movie did an assassin use a pipe with a gunsite to project a poison dart?
No one has answered this question yet.

Which French actor worked with directors Sergio Leone, Robert Enrico, Philippe Setbon, Federico Fellini and Giuseppe Colizzi?
Which Italian director died at the age of 53 on August 23, 1978?
Which Italian producer was the first to offer Woody Strode as much money as he would to a White actor? 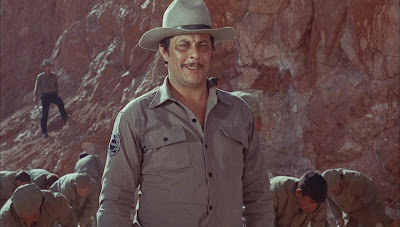 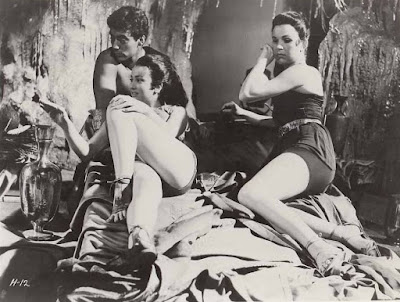 Rick Garibaldi identified last week's frame grab from ULISSE, aka ULYSSES.
Above is a new photo.
Can you name from what movie it came? 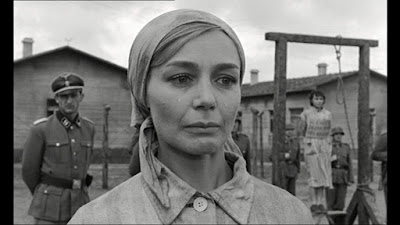 George Grimes identified last week's frame grab of Sue Lyon in UNA GOTA DE SANGRE PARA MORIR AMANDO, aka TO LOVE PERHAPS TO DIE, aka MURDER IN A BLUE WORLD, aka CLOCKWORK TERROR.
Above is a new photo.
Can you name from what movie it came? 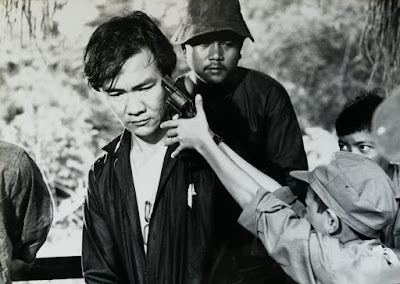 No one has identified that above photo yet.
Can you name from what movie it came?

TRACK 29 (1988) - Why someone felt that Dennis Potter's 1975 television play SCHMOEDIPUS should be turned into a movie with the locale changed from England to the United States may remain an unanswered question, but that original title better suggests why the film begins with Gary Oldman hitchhiking to John Lennon's "Mother". The new title seems to have come from "Chattanooga Choo Choo", made famous by Glenn Miller and His Orchestra, and may have inspired the Christopher Lloyd character being a model train fanatic.

LE VIEUX FUSIL, aka THE OLD GUN (1975) - The 1976 Cesar Award winner for Best Film, Best Actor (Philippe Noiret) and Best Music (Francois de Roubaix) is a pretty straight-forward revenge flick with a French doctor trapping the Nazis who murdered his wife (Romy Schneider) and daughter (Catherine Delaporte) inside his chateau. He goes after them with the old shotgun he inherited from this father. The film doesn't have the feel of an action film with many flashbacks.

EL CAMINO (2019) - There is a startling mention of Kadena Air Base, Okinawa, toward the end of this movie.

LES RIPOUX, aka MY NEW PARTNER (1984) - Writer-director Claude Zidi delivers a funny comedy depending on how tolerant you feel toward police corruption, putting cocaine into a nasal spray and prostitutes wearing fur coats. It won the César Award for Best Film and Best Director in 1985.

JOHN WICK CHAPTER 3 - PARABELLUM (2019) - I liked the simplicity of the first film. I'm not enjoying the cartoony fantasy complications the filmmakers are bringing into the story. At least THE MATRIX REVOLUTIONS had an ending.

IDAHO KID (1936) - Our hero, played by Rex Bell, comes up on a stagecoach robbery and opinions, "Amateur". He allows The Kid, played by Dave Sharpe, to rob the stagecoach, but then sabotages the robber's saddle. Capturing him, our hero takes him to town, has him return the stolen money, and then takes him to eat. On their way to eat, our hero gets an offer to sign up with John Endicott, played by Lafe McKee. An offer to join Clint Hollister, played by Earl Dwire, is also made. Eventually it comes out that our hero is Todd Hollister, the son of Clint Hollister. After his mother died in childbirth, Todd had to be protected from his father, who wanted to kill him, so Ma Endicott, played by Dorothy Wood, took the child to raise him. When it became apparent that this action poisoned the relationship between Hollister and Endicott, Todd decided to leave, but his absence did not cool things down. He has returned and takes a job with his father using the name "Idaho" in the hope that he can prove his worthiness to his father. However, Hollister has decided to escalate the feud and plans to string wire to the prevent Endicott from taking his cattle to water. After preventing Hollister from "framing" a murder twice, Idaho and The Kid quit Hollister and sign up with Endicott. After Idaho foils Hollister's plan with the fence, Hollister counters by turning the creek. Idaho convinces Endicott to not go to war, and then sets out to find more water. Instead, he prevents Hollister's men from dynamiting another possible stream, and then uses the dynamite to returning the creek to what it was. Hollister's henchman, Bibb Slagel, played by Charles King, takes another man to wait in town to shoot-it-out with Idaho - a challenge our hero accepts. Finishing off his father's killers, Idaho is challenged to fight by his father unless he leaves town by sundown. Ruth Endicott, played by Marion Shilling, turns to her father to help, so Endicott challenges Hollister to leave town a half hour before sundown. Rather than shoot-it-out with his father, Idaho decides to leave town until The Kid catches up with him on the road. Jumping between Hollister and Endicott, Idaho takes a bullet from his father, causing The Kid to break his promise and reveal Idaho's true identity. In the end, Hollister accepts our hero as his son and ends the feud. Meanwhile, the prospector, Tumblebug Jones, played by Phil Dunham, comes in and tells everyone that he's found gold and that they are all rich. Produced by the short-lived Colony Pictures, IDAHO KID is an incredibly low-budget effort. Rex Bell started his career in Silent Westerns, but is better known for marrying Clara Bow and becoming Lieutenant Governor of Nevada from 1954 until his death in 1962.

PELLE THE CONQUEROR (1987) - Based on the first part of the 1910 novel by Martin Anderson Nexø, this film co-written and directed by Billie August proves that Scandanavian filmmakers excell at portraying misery. I can't help but feel that this film won the Palme d'Or and the Best Foreign Language Oscar because viewers feel ennobled to have suffered through the 150 minute running time. There is no denying the skill and talent that went into making this film, but I certainly didn't enjoy it.

SOMMERSBY (1993) - This is not quite a remake of THE RETURN OF MARTIN GUERRE. But as they changed so much, why not just just create a wholly original story instead of twisting and embellishing the tale to reach the same ending?

MARLOWE (69) - James Garner carries this agreeable, TV-level mystery about Tinseltown naughtiness.  The cast of familiar supporters is worth the price of admission.

GUILTY BYSTANDER (50) - Drunk ex-cop gets word his kid is missing and tries to dry out while tracking down the culprits.  The plot meanders but New York locations and a solid performance by Scott make this worth checking out.

BLUE NOTE RECORDS: BEYOND THE NOTES (18) - Interesting documentary on the jazz label.

VALLEY OF THE DOLLS (67) - From 2006: "The deservedly legendary and fabulously tacky booze 'n' drugs showbiz pic.  Total widescreen, stage-bound 60s kitsch.  Some terrific sets, cool cars, and tons of delirious, soapy melodrama!  Must be seen to be believed.  Sharon Tate was, perhaps, the world's most beautiful woman."

NO HANDS ON THE CLOCK (41) - Newlywed private eye Chester Morris drags his bride with him on his latest missing persons case. Morris holds up this over-plotted programmer.  Fun.

THE DEADLY MANTIS (57) - Generally looked down upon by fans of 50s sci-fi, I find DM to be enjoyable for the very reasons it is spurned: because it is predictable and generic in the extreme.  It may be dull but it has a good cast, and its lethargy as art is an asset in my book.

THE PASSION OF SLOW FIRE (62) - Exchange student Alexandra Stewart living with professor Jean Desaily and his wife is found dead in their house.  Thru flashbacks we discover the culprit.  Edouard Molinaro (La Cage aux Folles and Eurospy fave To Commit a Murder) crafted a small and subtle mystery of interest only to the genre devotee or fans of Stewart.

AN AMERICAN AFFAIR (2008) A catholic male teen circa 1960 befriends a single young woman living across the street in D. C. soon discovering she is one of JFK's paramours just before he's assassinated.

40 GUNS TO APACHE PASS (1967) Turncoat Bodine (Kenneth Tobey) deserts a platoon of cavalry soldiers led by Captain Audie Murphy, confiscating the rifles necessary at the fort to defend against the Indians.

THE RICH MAN AND LAZARUS (2009) Dean Jones plays Abraham of the Old Testament in an independent production from brothers Andrew and Jon Erwin. The story is reputed to be a brief parable from the New Testament (Luke16:19) where a selfish rich man pays for his cruelty to a poor beggar, finding himself in the lake of fire upon death, when the beggar enjoys his reward in "Abraham's bosom".

Posted by William Connolly at 9:34 PM