Rescuing the pilot for the new Zorro TV show. 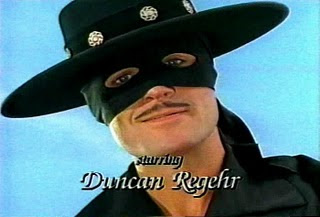 From: ZORRO UNMASKED
The Official History
by Sandra Curtis
The reworked concept attracted French partners, Ellipse Programme, the production arm of the French broadcaster Canal Plus, Germany's Beta TV, and Italy's RAI. In addition to New World Television, the Family Channel, an American cable operator, joined as a producer. A true international co-production took shape. The show was shot outside Madrid with a crew from Spain, England, and the United States. A total of eighty-eight episodes were filmed over four seasons.
The only cast member to survive the face-lift was Patrice Martinez. The rest of the cast was completely new. Martinez, who was born in New Mexico, played the female lead in Steve Martin's THREE AMIGOS and had a small role in Tim Burton's BEETLEJUICE. She was trained at the Royal Academy of Dramatic Arts in London on scholarship, and upon graduation she received a number of the academy's prestigious awards...
A Mexican actor named Ferdinand Allende was offered the lead as Zorro/Diego. He declined the part, however, because the shooting schedule conflicted with his wedding.
The nod was finally given to Canadian actor Duncan Regehr, who was tall, dark, and handsome. Like Guy Williams, Duncan can fence and ride. Both in Lethbridge, Alberta, and raised in Victoria, British Columbia, Duncan entered show business as a figure skater at age ten with local and regional ice shows. He began acting at the age of fourteen, hosting a talk show on cable TV in his hometown. He attended the Bastion Theater School, Vancouver's Julliard, spending two years studying voice, movement, acting, and fencing, along with his academic load. Duncan undertook several years of acting in regional theater, moving on to the Ontario Shakespeare Festival before jumping into television and films. He had trained for a spot on Canada's Olympic boxing team from 1976 to 1980 and had learned to fence at school in Ontario. While living in Los Angeles, he raised horses. At six-five and 196 pounds, Regehr cut a commanding image as the Spanish California hero.
Regehr had been considered for the pilot but was tied up with another series at the time. He was called again when Patrick James was abandoned. This time, schedules clicked. Duncan, who had played the swashbuckler Errol Flynn in MY WICKED, WICKED WAYS, was in England working on THE LAST DAYS OF POMPEII when he got a call from one of the Zorro producers. Gary Goodman went to meet him. Since Duncan had already seen the script, casting was a snap, and as he explained, the producers were "very keen to get me for the role. So, that's it! I graduated to Zorro."
Posted by William Connolly at 9:12 PM