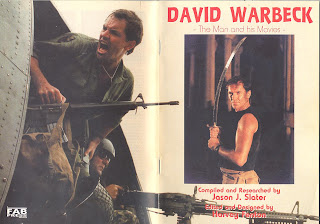 The Man and his Movies
David Warbeck was interviewed by Jason J. Slater with the assistance of Harvey Fenton, Julian Grainger and Michelle Perks. The interviews were transcribed by Matt Pelton.

Q: Did you think that A FISTFUL OF DYNAMITE would mean that you would have a career in Westerns?

No, not at all. I didn't know what it was about. I didn't have a clue! I'll try and make this story short...
I was doing this play in the Birmingham Rep., very prestigious, the last play in the old theatre. We were doing "The Barretts Of Wimpole Street" and I had a ten minute role that got all the applause and one of my favourite friends had to do all the slog work. I said to him "I've worked out how to get applause when I come on stage, let alone when I go off", being all clever and terribly glamorous. Anyway, during this production my agent in London called and said "some Italians at the Dorchester want to see you about some Italian crap", so I went and saw them and this huge guy bear-hugged me at the door and said "Darling! You're the one!", and he literally carried me into the room and there was Sergio Leone, who I didn't know from a bar of soap, and all his family. They all leapt up like a bunch of hyped-up baboons (mad Italian babble noises). "Have a drink, have a drink!" (laughs), and when they calmed down I said "What's going on?!", and they said "You're coming now! To Heathrow!"
But I had to finish the play, another week or two weeks to go so I said, "Hang on just a minute, let me phone my...".
They jumped in, "No, you don't phone blah, blah...", so eventually I got hold of my agent, a guy called Jimmy Frazer and I said "I'm with these Italians," and he said, "Oh God! That crowd! Have they offered you a drink?" and I said, "Yes! That's all they've been doing!", so he said "Get out of there, hit them if you have to, get out, cry kidnap!" (laughs)
Another preposterous story...
So I hung up and said to them, "Look, I've got to go" and they said "Have another drink" (laughs) and as you know I rarely touch the stuff, so I had another drink and was getting woozier and woozier and they said "Now we take you to Heathrow"; they wanted to fly me directly to Dublin where they were shooting the scenes. They filmed all around the world, but they filmed all the Irish stuff on location. That was where I was being shot up and stuff.
So I don't know how I managed to get out of it but I went back to the theatre that night. I spoke to my best friend - who I was giving a hard time about getting all this applause on my entrance - and I asked him this quite recently, about thirty years later, I said, "Did you engineer it so I'd go and do that film so you wouldn't have me fucking up your life?" (laughs), and he said, "Darling, whatever made you think that?"
Anyway, they very luckily got hold of the manager and said that I'd been offered this film part by all these mad barmy people and I was on the plane the next day to Dublin. I did not have a clue what they were doing...
When I got there I met James Coburn, very sweet, charming, he was an absolute pleasure, and none of us knew quite what Sergio was on about, because Sergio did not speak a word of English. Well, he did, he spoke "Yes, No. Stop. Go. Good. Bad". That was it! And he had worry beads.
Basically Sergio was a peasant, and absolute... vomiting at the table, grabbing the waitresses by the cunt peasant, staggeringly crude behaviour. And his cronies!...
One of his reasons for film making, a bit like Russ Meyer, was to get as many birds on the end of his fingers as he could basically (laughs) It's as crude as that...
For example when we got to Dublin he saw this bus... now Sergio loved guns; every time we had a gun sequence he would practice with them, "kapow, kapow, kapow", that would be part of his jollies, and he also likes things like tanks, cars, trucks and buses... you'll notice that this little bus gets about 3 seconds of screen time, and it's the bus from RYAN'S DAUGHTER, which just happened to be parked on the back-lot, so he said "We've got to have the bus!"
And he said "What do we have in the bus? Virgins! Lots of virgins! Schoolgirls!"
They auditioned for the length of time I was in Dublin. The corridor of the Intercontinental Hotel was always lined up with all these virgins being groped and interviewed by this Italian porno crew... all these girls, little Irish virgins.
So finally they got them all on the bus and if you see the film, well... that was their intro to the world of films.
I'm doing a bit of a jump here...
I used to meet Sergio at these Cannes festivals because he was the President of the Committee for some reason... I couldn't believe it, all these imposing desks and libraries and stuff behind him, trying to look like the Gent! But he did become very sophisticated, but not in the early days! He always kept on to me and he wanted me to do ONCE UPON A TIME IN AMERICA.
Posted by William Connolly at 9:32 AM