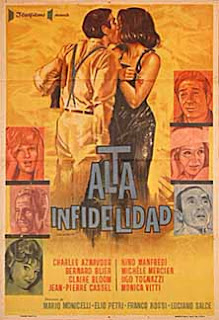 by Ernest G. Laura - Compiled by A.N.I.C.A. (National Association of Motion Pictures and Affiliated Industries) Rome, Italy - Edited by CIES Soc. Coop. r. 1 (Institute for the Promotion of Italian Motion Pictures Abroad) Rome, Italy under the auspices of the Ministry of Tourism and Entertainment
Another actor who took up directing was Vittorio Caprioli (born in 1921, with Franca Valeri and Alberto Bonucci, the guiding spirit of the "Teatro dei Gobbi", the first excellent example of Italian cabaret). La manina di Fatma (Fatma's Touch), written by Giuseppe Patroni Griffi, is a pungent grotesque, interpreted by Franca Valeri with a fine wickedness (it is the first of the two episodes of I CUORI INFRANTI [BROKEN HEARTS], 1963). ALTA INFEDELITA (HIGH INFIDELITY), made in 1964, was a series of variations on the theme of adultery, in which several reputable directors (Franco Rossi, Elio Petri, Luciano Salce and Mario Monicelli) retrieved with great skill the classical formulas of the old French "pochade" with unfaithful husbands, adulterous wives prone to hasty assignations in the afternoon, lovers hidden in cupboards. Nothing new, but Age, Scarpelli, Ettore Scola and Ruggero Maccari succeeded in putting out a satirical claw or two with respect to the hypocracy of bourgeois marriage, aided most of all by an outstanding group of Italian and foreign actors: Nino Manfredi in Scandalosa (Scandalous) by Rossi, Charles Aznavour and Clair Bloom in Peccato nel Pomeriggio (Sin In The Afternoon) by Petri, Monica Vitti, Jean-Pierre Cassel and Sergio Fantoni in La sospirosa (The Sob-Sister) by Salce, Ugo Tognazzi, Michele Mercier and Bernard Blier in Gente moderna (Modern Folks) by Monicelli.
Posted by William Connolly at 11:30 AM