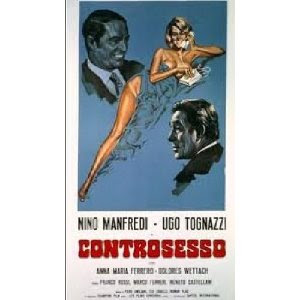 by Ernesto G. Laura - Compiled by A.N.I.C.A. (National Association of Motion Pictures and Affiliated Industries) Rome, Italy - Edited by CIES Soc. Coop. r. 1 (Institute for the Promotion of Italian Motion Pictures Abroad) Rome, Italy under the auspices of the Ministery of Tourism and Entertainment
Among the directors reluctant to let themselves be enclosed into facile categories, Marco Ferreri showed he had grasped the dimensions of the short story in the excellent episode , Il professore (The Professor), in CONTROSESSO (COUNTERSEX: 1964), in which, with the help of a script by the Spanish humorist Rafael Azcona, Ugo Tognazzi draws, in the pithy tones of a psychological satire, the figure of a teacher, to outward appearances a moralist but actually afflicted by sexual deviations. Azcona is a specialist of "black humor" and is at his best in the script of L'UOMO DEI CINQUE PALLONI (THE MAN OF THE FIVE BALLOONS), directed by Ferreri as a feature film, then reduced to the dimensions of an episode in OGGI, DOMANI E DOPODOMANI (TODAY, TOMORROW AND THE DAY AFTER: 1965) and later re-edited and distributed in its original form. An industrialist (Marcello Mastroianni) comes home with some rubber balloons to blow up and gradually becomes obsessed by them ("how long do you have to blow before they burst?"), until he jumps out the window. The customary team of Ferreri, director, and Azcona, script-writer, comes up with a full-length episode film in 1966 MARCIA NUNZIALE (WEDDING MARCH). It consists of four stories about marriage, suspended between the present and the future. In Prime nozze (First Wedding), Tognazzi organizes an authentic wedding, down to the smallest details, between his bitch, Camilla, and the dachshund Luther; in Il dovere coniugale (Marriage Duty), the actor is an ordinary little man oppressed by an over-delicate and demanding wife, a meddlesome mother-in-law and a spoiled child; in Igiene coniugale (Marriage Hygene), Tognazzi and Alexandra Stewart are the symbols of an average American couple of New York in a certain satirical vision of the American way of life; in La famiglia felice (The Happy Family), lastly, the year is 1999, when men have invented life-size plastic dolls which substitute wives and children. The anarchism of the two-author team sough to emphasize the straits of the marriage bond and its ritualism. Valentino Orsini, Paolo and Vittorio Taviani had a couple of years earlier exploited the formula of the comedy of manners in episodes to take their stand in one of the civil struggles that at the time were shaking Italy to the roots: the struggle for the introduction of divorce. I FUORILEGGE DEL MATRIMONIO (THE OUTLAWS OF MARRIAGE: 1963) illustrated in six episodes the "extreme cases" cited in the bill presented in Parliament by the Honorable Mr. Sansone, pressing hard on the grotesque and the ironical and with Ugo Tognazzi and Annie Girardot in the leading roles.
Posted by William Connolly at 11:55 AM