6. Political And Civil Satire: The Comedy Takes A Look At History part three 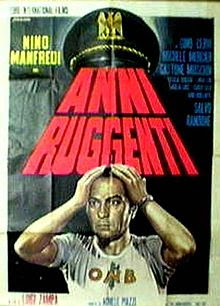 by Ernesto G. Laura
The trilogy concluded with ANNI RUGGENTI (ROARING TIMES: 1962) from a story by Amidei, Vincenzo Talarcio and the director himself and a script by Zampa, Ettore Scola and Ruggero Maccari. Set in the Fascist period, the film is vaguely based on the "gimmick" used by Gogol in THE INSPECTOR GENERAL. Omero, the protagonist, is in fact an obscure insurance salesman who in 1937 reaches a small town in the Puglia district and is taken by the local Party leader for an Inspector sent from Rome. Omero is one of the countless young men who grew up under Fascism and are innocently Fascist, having had no other political or civil experiences. But when he realizes that the town leaders have indulged in one speculation after the other, moving on the terrain of illegality and fraud, he will acquire an awareness he didn't have before. With his usual bitterness, Zampa does not offer immediate solutions: the young man, disgusted and disheartened, returns to Rome and the dishonesty will continue as before. Nino Manfredi, in the role of Omero, creates a complex figure, slow and laborious in its evolution, which is one of his finest performances of the '60s.
Eduardo De Filippo, in NAPOLI MILIONARIA (MILLIONAIRE NAPLES), based on a famous play of his by the same title, offers a broad canvas of the circumstances of a whole family in the decade between the beginning of World War II and the Liberation. Naples, with its dingy alleys, its scrubby houses, is carried to the screen with great love, introducing into the story that is also comcial notes of pain, a spiritual suffering, an age-old inner unrest. Eduardo plays, as he did on the stage, a veteran who comes home after years of fighting at the front and imprisonment in Germany and finds everything in ruins: his wife is involved in shady deals with a man with whom she is having an affair, his son is a petty thief and his daughter is on the way to becoming a prostitute. The poor man remains silent and observes that ruination, plunged into grief, yet it is precisely that silence of his, the very presence of someone who has experienced from beginning to bitter end the entire ordeal of the war, that will give the family the strength to start all over again. Recounted in these terms, the film could sound like a dismal social drama, but such is the Neapolitans' ageless familiarity with poverty and misfortune that the director-author-actor is able to alternate the gloomy moments with sunnier stretches of smiles, to criticize certain characters with the arms of ridicule, to frequently indulge in highly subtle satire. Toto appeared in NAPOLI MILIONARIA (MILLIONAIRE NAPLES) in the cameo role of an unemployed street-cleaner who "gets by" with frauds that are more fanciful than criminal.
L'ARTE DI ARRANGIARSI (THE ART OF GETTING BY) would be the title and subject of one of Luigi Zampa's most scathing films, the last one Vitaliano Brancati wrote before dying. But this film will be discussed in the following chapter, devoted to the actor who was the ideal interpreter of L'ARTE DI ARRANGIARSI (THE ART OF GETTING BY) and other films related to the history of contemporary Italy: Alberto Sordi.
Posted by William Connolly at 8:50 AM