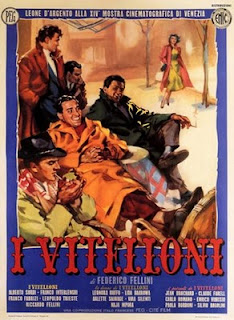 MAMMA MIA, CHE IMPRESSIONE! (DEAR ME, WHAT A FRIGHT!: 1951) by Roberto Savarese (with the supervision of Vittorio De Sica) was produced by a company especially set up by De Sica and Sordi. The story was by Sordi himself, who also wrote the script with De Sica and Zavattini, showing right from the start a firm determination not to be a mere performer but to take an active part in the creation of the film. He played the role of a doltish, simple-minded boy scout, with a certain flair for parody, but the film on the whole was second-rate and had no success at the boxoffice.
He owed his success, as said above, to Fellini's I VITELLONI (THE YOUNG STEERS), presented and awarded a prize at Venice in 1953. Fellini had, however, already established his particular world with LO SCEICCO BIANCO (THE WHITE SHEIK) in 1952, written by Tullio Pinelli and Ennio Flaiano and based on a story that Michelangelo Antonioni also had a hand in. It told of a couple of petty bourgeois newly-weds, very respectable, very careful of appearances, who come to Rome from the South on their honeymoon, which includes a visit to the Pope. Vanda, the newly-wed wife, is a rabid reader of picture-story magazines (which grew up in Italy and were enormously popular in the '50s, mostly with women). Vanda takes advantage of the trip to Rome to make the acquaintance of a picture-story star, the daring young man who plays the lead in the story of the "White Sheik". The encounter was to be very disappointing, as Fernando Rivoli, the "White Sheik", is an uncouth, sly and cynical character, deceitful and promiscuous, exactly the opposite of the "unblemished hero" she had dreamt of. What emerges in the film is that idea of the Italian provinces as the begetter of myths, of dreams (and frustrations) that was to return as a constant refrain in the director's films. But the Sordi "personage" also emerges fully drawn, part cad, part show-off and part "big baby".
In I VITELLONI (THE YOUNG STEERS: 1953), where the Rimini of Fellini's boyhood serves as background, the director follows a group of friends about to turn thirty, when the carefree years of youth are coming to an end. But they refuse to grow up, are against working or getting married and would like nothing better than to idle away their time as eternal students. Life would bring them, one by one, face to face with their responsibilities. Alberto, in particular, coming home from a Mardi Gras party where he has had a wild time dressed as a woman, finds his mother in tears because his sister has run off with a man, forever. He, who has always led an idle life at his sister's expense, suddenly has to become a man.
Posted by William Connolly at 1:50 PM