6. Political And Civil Satire: The Comedy Takes A Look At History part one 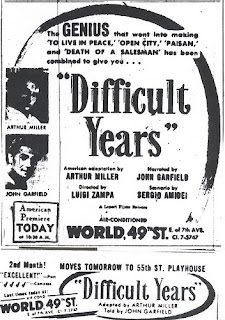 by Ernesto G. Laura - Compiled by A.N.I.C.A. (National Association of Motion Pictures and Affiliated Industries) Rome, Italy - Edited by CIES Soc. Coop. r.1. (Institute for the Promotion of Italian Motion Pictures Abroad) Rome, Italy, under the auspices of the Ministry of Tourism and Entertainment

In 1950, the director Luigi Zampa wrote: "I have always chosen the subjects of my films in terms of a specific concept: that of stressing, through the complex and varied expression of a film, human situations in the social, political and spiritual atmosphere 'hot off the fire' as it were; that is to back up-sifting them through a careful criticism as impartial as possible - the events of the times and to record the meanings, the color, the morality of those times."
No better example could be given of the meaning of the films of Luigi Zampa, who as early as 1946, with VIVERE IN PACE (LIVE IN PEACE), introduced history into comedy, the momentous history of a nation, seen, however, through the experiences of the ordinary man, never of a hero, never of a "protagonist".
From the moment they appeared, these kinds of films stirred up a hornets' nest. Since comedies were made of smiles and marked by a light tone, some people found it offensive to joke about the even painful and tragic events of national history. They didn't understand that smiles can represent a form of taking stock, a way of criticizing, and that therefore comedy, when instead of escaping reality it sinks its roots deep, can foster the maturing of the citizen, help him understand his own past in order to better live his own present.
The film in particular that provoked unwarranted controversey was ANNI DIFFICILI (HARD TIMES), made in 1947/48 and awarded (but only for its "excellent technical workmanship") at the Venice Festival. Taken from a short novel by Vitaliano Brancati, Il vecchio con gli stivali (The Old Man With Boots), with a script written by the Sicilian novelist in collaboration with Sergio Amidei, Enrico Fulchignoni and Franco Evangelisti, it drew on the model biography of an ordinary little Italian, a city clerk in a Sicilian village, who, though understanding nothing about politics, joins the Mussolini party during the Fascist regime, otherwise he would have lost his job. (The Party membership-card was by no accident known as the "bread card" since without it it was hard to find work and consequently to eat.) The clerk, Piscitello, tries to be an honest Fascist just as he is an honest clerk, even though he is made uncomfortable by having anti-Fascist friends whose position he respects, just as they, on the other hand, understand his human predicament. The film, like the book, follows the historical events that befall Italy, from the point of view of the tiny Sicilian village and through the eyes of the insignificant Signor Piscitello: the African War in 1935/36, which his son Giovanni goes off to fight, the Spanish Revolution, where Giovanni also goes to risk his life, lastly World War II in which the boy dies at the front. With the liberation of Sicily, Piscitello loses his job because people accuse him of having compromised himself with the Fascist regime.
The alliance between the writer Brancati and the director Zampa was highly successful: the former transmitted to the latter his brilliant capacity for treating characters and situations ironically, bringing the Fascist period back to life with piercing satirical wit; the latter added his human warmth, which at times carried the events recounted by Brancati down the paths of sentiment and pathos, and his unerring ability to translate the written page into lively screen images. In the United States, ANNI DIFICILI (HARD TIMES) was presented in 1950 with an explanatory comment written by Arthur Miller and spoken by John Garfield.
Posted by William Connolly at 12:57 PM