6. Political And Civil Satire: The Comedy Takes A Look At History part two 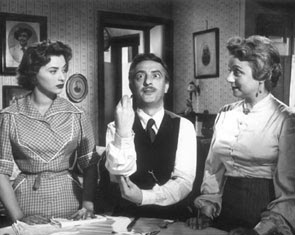 by Ernesto G. Laura - Compiled by A.N.I.C.A., Edited by CIES Soc. Coop. r. 1. under the auspices of the Ministery of Tourism and Entertainment

In 1953, amidst new and even more violent criticism, Zampa carried out the long-fondled project of providing ANNI DIFFICILI (HARD TIMES) with an ideal sequel. It was called ANNI FACILI (EASY TIMES). Vitaliano Brancati centered his story around another little man from the Sicilian provinces, a grade-school teacher, De Francesco, who is quite similar to the Piscitello of the other film. He barely manages to scrape by on a miserably low salary, in a postwar period that has not yet resolved the great social problems of the country, indeed seems them grow worse by the results of the war. His ambitious wife convinces him to move to Rome, because there, as an old anti-Fascist, he could count on influential friends who had risen to power and were in a position to help him make a career for himself. So De Francesco comes to Rome where his meager salary is even less sufficient than before to support his family. Without realizing it, he finds himself mixed up in a shady business involving ministerial graft. In the end, swamped by debts contracted for his daughter's wedding, he lets himself be talked into taking money for promoting a rich student. The misdeed is discovered and he ends up in jail. As the trial, he asks the judges to give him the maximum sentence, in order to set an example against the widespread corruption.

Just as Rossellini had turned the comedian Fabrizi into the dramatic actor of ROMA, CITTA APERTA (ROME, OPEN CITY), so Zampa chose for his "hero" the Neapolitan actor Nino Taranto, who, like Macario and Toto, was one of the most important representatives of the musical revue, and Taranto, stepping out of the farces he had up till then interpreted on the screen, proved to be a complete actor, always succeeding in striking just the right tone for balancing out the elements of drama and those of light comedy. The film, in depicting certain aspects of Rome in the '50s, does not fail to launch a ferocious attack on neo-Fascism, especially in the grotesque description of the meeting of a group of old Fascist leaders in a country house.
Posted by William Connolly at 10:44 AM