Which Italian actor worked with directors Luchino Visconti, Mario Amendola, Viktor Tourjansky, Duilio Coletti, Fernando Cerchio and Cesare Canevari?
No one has answered this question yet.

Giuseppe Collizzi first met Woody Strode on the location for which film?
No one has answered this question yet.

Which French actor appeared in Italian Sword and Sandal films, Italian Westerns and a TV series starring Terence Hill?
No one has answered this yet.

Which Italian Western was co-produced by Shaw Brothers of Hong Kong?
George Grimes knew that it was EL KARATE EL COLT Y EL IMPOSTER, aka THE STRANGER AND THE GUNFIGHTER, aka BLOOD MONEY.

Which Italian Western was co-produced by Yangtze Film Company Ltd.?
George Grimes knew that it was ...ALTRIMENTI VI AMMUCCHIAMO, aka KUNG FU BROTHERS IN THE WILD WEST.

Which Italian Western star's father was a former Irish member of the U.S. Cavalry who had retired to France?
No one has answered this one yet.

Which Shaw Brothers production reuses footage of the monster in the lake from PERSEO?
Which American screenwriter provided Sean Flynn with two projects he made in Italy?
Which American actor who appeared in Italian Westerns fainted onto John Wayne in a World War II movie? 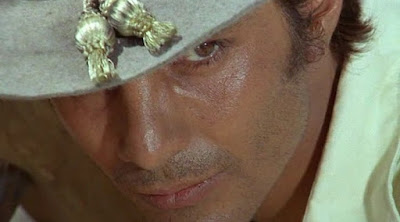 George Grimes and Rick Garibaldi identified last week's frame grab of Cameron Mitchell in JIM IL PRIMO, aka THE LAST GUN.
Above is a new photo.
Can you name from what movie it came? 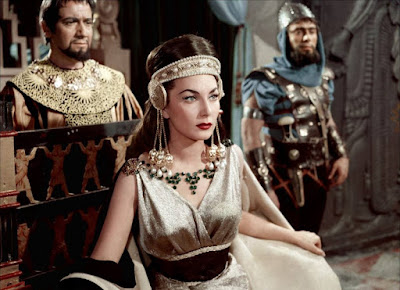 No one has correctly identified the above frame grab yet.
Can you name from what movie it came?

George Grimes identified last week's photo of Claudia Cardinale in VAGHE STELLE DELL'ORSA..., aka SANDRA.
Above is a new photo.
Can you name from what movie it came? 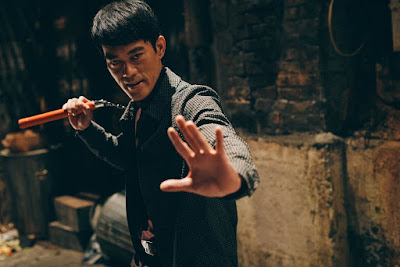 IN HARM'S WAY (1965) - For two hours, this is a solid World War II drama with a refreshing look at non-action events. Then it becomes a heavy melodrama and the final battle featuring minature ships and fireworks is rather poor.

DECEPTION (2003) - I'll watch just about anything featuring Dina Meyer, and for a twisty suspense film, this wasn't bad - but it wasn't good enough to prevent me from fast-forwarding through. Anna Silk and Rachelle Lefevre also put in welcome appearances.

UNA MARIPOSA EN LA NOCHE, aka A BUTTERFLY IN THE NIGHT (1976)

SHAOLIN TEMPLE, aka SEVEN SPIRIT PAGODA (1976) - It is a pleasure to watch Hsu Feng, but in better movies.

BABY LOVE (1969) - The trailer for this movie was so much better than the film.

THE WHISTLER (44) - Despondent over the death of his wife, Richard Dix puts out a contract on his own life.  When his wife is found alive, Dix must race to stop his murderer.  William Castle's implausible thriller puts former big-time star Dix thru the paces but the acting honors must go to J. Carrol Naish as the killer who terrorizes his prey before pouncing as an intellectual, psychological experiment.  The first of a series of eight programmers based on the popular radio program.  Dix starred in all as different characters.

THE PURPLE MASK (55) - Another take on the Scarlet Pimpernel with Tony Curtis; light, colorful and fun enough.

LINDA RONSTADT: THE SOUND OF MY VOICE (19)

BATTLE FOR THE LOST PLANET (86) - Matt Mitler is an adventurer who steals a secret weapons tape and then steals a space shuttle to escape.  Stuck in space, he witnesses an attack on Earth, and years later, is finally able to land on our post-apocalyptic planet.  An early Brett Piper no-budget sci-fi production features stop-motion animation, monstrous-looking aliens, and plenty of miniature work.

THE SWORD AND THE CROSS (1958) Yvonne de Carlo plays Jewish harlot Mary Magdalene who falls in love with Roman tribune Gaius Marcellus (Jorge Mistral), doubletiming as mistress to Hebrew Hamen (Massimo Serato). The story assumes she is the same Mary that was sister to Martha (Rosanna Podesta) and brother Lazarus (Terence Hill) whom Jesus raised from the dead. But her home town of Magdala vs. Bethany distinguishes her and "It was that Mary which anointed the Lord with ointment" who was from Bethany. I think they are two different Marys, making the storyline invalid.

RED SUN (1971) Trainrobbers (Charles Bronson, Alain Delon  et. al) incur the wrath of a Japanese entourage conducting a stately present to POTUS in the form of a gold sword. The Frenchman steals it, doublecrosses his pal, thereby producing a tentative Oxidental-Oriental alliance to recover the gift.  Along the way they pickup "working girl"  Ursula Andress. They're all fighting the Commanches in the end.

Cannonball 1958 B&W television episode:
'Shock'. Canadian truckers Mike Malone (Paul Birch) and Jerry Austin (William Campbell) pick up a passenger who has been given a job as a parts man for their company C&A Transport. He has a drinking problem and doesn't know the first thing mechanically. But, it turns out at a traffic accident, and to everyone's surprise, he demonstrates his mettle as a physician. Directed by Leslie Selander.