1. The Thirties: The Age of the "White Telephones" part three 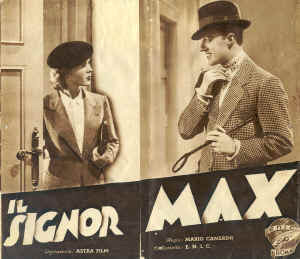 From: COMEDY ITALIAN STYLE
by Ernesto G. Laura
Compiled by A.N.I.C.A. (National Association of Motion Pictures and Affiliated Industries) Rome, ItalyEdited by CIES Soc. Coop. r.1 (Institute for the Promotion of Italian Motion Pictures Abroad) Rome, Italy under the auspices of the Ministry of Tourism and Entertainment

Mario Camerini carried forward this brand of popular, gently realistic comedy over the following years, proving that GLI UOMINI, CHE MASCALOZONI... [MEN, WHAT SCOUNDRELS...] was not an isolated, and unique case but could give rise to a genre, to a kind of light comedy highly successful with audiences. Vittorio De Sica starred again in IL SIGNOR MAX [MR. MAX], which in 1937 won a prize at the Venice Festival, and was the pungent portrait of a snobbish Roman newsdealer who with his polished manners and smattering of foreign languages tries to make his way into "high society", that which today would be known as the jet set. In 1939, De Sica would again play the part of a driver who falls in love with a salesgirl in GRANDI MAGAZZINI [DEPARTMENT STORE].
It is clear that the "Camerini-style" comedy foreshadows what today is known as "Italian-style" comedy. It is the opposite of those escapist films of a Central European flavor in that it seeks to express topical Italian characters and situations. Smiles could be tinged with tears and heartbreak, though the generally optimistic tone of Camerini's film stories inevitably led to the "happy ending". This mixture of the serious and the comic also foreshadows the characteristics of the future Italian-style comedy. Camerini views his characters with true affection and sets the simple and fundamental values of their way of life against the artificiality and emptiness of the upper classes. So there is a constant theme that runs through his comedies, though it is never carried to extremes; it is tempered rather by a good-natured smile and a lucid irony. Along with Camerini, some of his favorite script writers should be mentioned: the writer (and future director) Mario Soldati, the critic Mario Pannunzio, the playwright Aldo De Benedetti. In any case, Camerini was not simply a director, but took an active part in the script, which was often based on a story of his own.
In the wake of these successes, other directors were able to come to the fore. In 1933, for example, Raffaello Matarazzo (1909-1966) directed TRENO POPOLARE [THIRD-CLASS TRAIN], a story about a group of youngsters on a river excursion, with no stars, no dramatic events, nothing but a keen, perceptive observance of reality, held together by a sharp and high-spirited pace. The same charm and spontaneity marked MUSICA IN PIAZZA [MUSIC IN THE SQUARE: 1935] directed by Mario Mattoli (1898-1980), the first film shot live in a hill-town near Rome and starring an internationally famous Italian music-hall singer, Milly.
Posted by William Connolly at 2:37 PM