1. The Thirties: The Age of the "White Telephones" part five 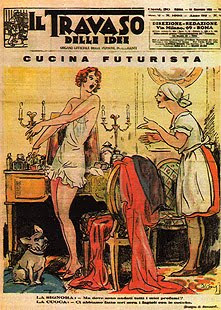 At this point, in order to understand the evolution of Italian film comedy, mention must be made of a journalistic phenomenon peculiar to Italy between the two wars: the enormous popularity of comic weeklies.

From the end of the 19th century on, comic weeklies had occupied more and more space on the newsstands, but never reached the enormous circulation they enjoyed under Fascism. There is a reason for this. Though freedom of the press was a dead letter and the regime gave orders even as to how much space was to be devoted to a given piece of news, the comic weeklies represented a tolerated corner where some irony and a little social criticism could be indulged in. The best-known ones were "Il Travaso delle Idee" (color tabloid), "Marc' Aurelio" (large format, a paper repeatedly confiscated in 1932 for political reasons until the publisher was finally forced to fire the editor) and "Bertoldo" (it too large format).

These weeklies were entirely made up of cartoons (often moderately sexy), jokes and short stories. Their editors and contributors were the same people who, in the same period, gave birth, in the field of books, to a brief flowering of the humorous novel and who moreover gave their support to the ferocious nonconformist satire of Achille Campanile, which succeeded in slipping by the censors because it was expressed in surrealistic terms, anticipating by some thirty years Ionesco's humor of the absurd. Among the contributors to these weeklies are to be found the names of many post-war Italian film makers: Federico Fellini, Marcello Marchesi, Steno, Age (Agenore Incrocci), Furio Scarpelli, Cesare Zavattini, Vittorio Metz, Giovanni Guareschi.

What kind of man did these comic weeklies portray? It was without question an Italian who had never heard of Fascism, never heard of its "passwords", its myths. It was instead the man of the street, the one to be found in the films of Mario Camerini (whose brother, Augusto, was the well-thought-of satirical cartoonist). Among the contributors to these papers, one name is particularly important: Cesare Zavattini (born in 1902), who as early as 1931, in his book, "Parliamo tanto di me", expressed his love for the poor, the misfit, the underdog, creating bizarre and slightly mad situations in which the poor became the symbol of opposition to society and its laws.
Posted by William Connolly at 4:00 PM