1. The Thirties: The Age of the "White Telephones" part nine 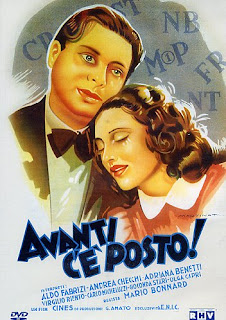 Among the various regional and dialectal theatrical traditions, little space was occupied by the Roman dialect theater, despite the presence of an extraordinary actor like Ettore Petrolini. Roman dialect flourished, not so much in the "respectable" theaters, as on the shoddy stages of secondrate vaudeville houses, which were mostly located in the poorer parts of town with a decidedly working-class audience. One of the lesser celebrities of those theaters was Aldo Fabrizi (born in 1906), comedian, poet, entertainer of enormous appeal with his round face, his plump body and a deliberately unconventional way of speaking, that is with the words almost "eaten" to give the impression of words being made up on the spot rather than memorized beforehand. A former silent movie star who had taken up directing with some success, Mario Bonnard (1889-1965) put Fabrizi, then unknown in movies, into the leading role of AVANTI C'E POSTO... [COME ON, THERE'S ROME...: 1942]. On stage, the actor had created, with a fine sense of parody, a number of typical Roman characters, including a streetcar conductor. It was this figure which was placed at the center of a story that recaptures the humorous, sentimental flavor of Camerini's comedies in telling of the bashful courtship a middle-aged streetcar conductor pays to a pretty young house maid who is out of a job, until he realizes that the girl is in love with a young colleague of his. The story, written by Zavattini, Fabrizi and Piero Tellini, is weak, but it is the way it is told that matters. Between romantic scenes and scintillating gags, a quite accurate picture of wartime Rome emerges and the film ends sadly with the young husband-to-be leaving for the front of an already lost war. Federico Fellini also lent a hand to the script and certain gags are typically his. Immediately after, Mario Bonnard, director; Fellini, Fabrizi, Tellini, scriptwriters; Marino Girolami, scenarist, came up with CAMPO DE' FIORI (1943), where Aldo Fabrizi plays the part of a fishmonger who has a stormy love affair with a woman who sells fruit and vegetables in the popular open-air market of Campo de' Fiori, one of the most picturesque squares in Rome. The woman was Anna Magnani, till then known as a variety show star with Toto and in films in the type-cast role of a coarse woman of dubious reputation. CAMPO DE' FIORI completely overhauled the image of Anna Magnani, turning her into a positive figure: a simple woman of the people, all heart and instinct, brusque and aggressive in manner. A love affair between two actors no longer very young (Fabrizi was thirty-seven, Magnani thirty-five) in lower-class roles was something new and the film took great delight in the lively imagery of the true-to-life streets and squares of Rome. The third and last film of the series was, again in 1943, L'ULTIMA CARROZZELLA [THE LAST CARRIAGE], directed by Mario Mattoli and written by Fabrizi and Fellini, the story of a Roman carriage driver, galled by the competition of taxis, who forbids his daughter to marry a taxi driver. This then completes the triptych which brought to the screen a bittersweet image of "popular" Rome, of simple people who live modestly off their earnings in a city caught in the transition between an old world that would be swept away by the war, and a new world that could yet barely be glimpsed. Meanwhile, as the historic tragedy of Italy ran its course, comedy pointed in the direction of human solidarity and understanding with a certain hope for the future.
Posted by William Connolly at 12:16 PM