2. The Forties: The Season Of Neo-Realism part two 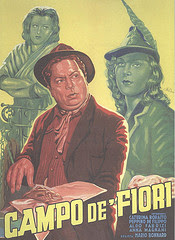 Even so, as has now been made perfectly clear, Italian cinema cannot historically be divided into two neat division: Fascist-period films on the one side, neo-realism on the other. Many elements of the way films were made before were carried over into the post-war period, even in important works, if for no other reason that the artistic and technical personnel had remained pretty much the same. So it is easy to understand how, in an essentially dramatic and, indeed, tragic genre like neo-realism, the ingredients of comedy were not altogether lacking.
Take ROMA, CITTA APERTA [ROME, OPEN CITY], directed in 1945 by Roberto Rossellini (1906-1977). The great director manages to create a manifold image of a luminous city suddenly plunged into gloom by the Nazi occupation and the deplorable phenomenon of collaborationism. Rossellini shoots on the street, recreating, where it actually took place, a tragedy experienced barely yesterday, the scars of which are still painfully fresh in people's minds. He takes as a point of reference a parish priest, Don Morosini (the story is true), and the mother of a family who sees her man arrested and then tortured to death. Two characters meant to be the exact opposite of the "heros" of the traditional epic cinema and who could never be played by two "cute and glamorous" matinee idols, according to the rules of the star system. So Rossellini chose Aldo Fabrizi and Anna Magnani, the couple of CAMPO DE' FIORI and L'ULTIMA CARROZZELLA [THE LAST CARRIAGE], and carried their usual roles as popular comedy figures up and up, without a hitch, to the heights of tragedy. ROMA, CITTA APERTA [ROME, OPEN CITY] could not have existed without the triptych of comedies which Fabrizi and Magnani had previously appeared in. It was those films that got audiences used to leading actors who were neither glamorous, nor very young, to films shot outside, in the open, with real people, to the use of Roman dialect instead of the polished Italian of the professional actors. To be sure, ROMA, CITTA APERTA [ROME, OPEN CITY] is a masterpiece and the three films that preceded it were, instead, made for sheer entertainment, but the connecting thread between them is clear. Not only, but the presence among the script-writers of the same Federico Fellini of those films made it certain that the material of ROMA, CITTA APERTA [ROME, OPEN CITY] would be "alleviated" from time to time by a few light, but essential humorous touches.
Posted by William Connolly at 3:54 PM