Duccio Tessari on the end of the Italian Western 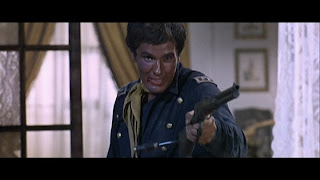 LDL: A typical element of American Westerns were Indians. Why was this element missing from Italian Westerns?
Duccio Tessari: Because we don't look like Indians! A tall blond stuntman can look like an American. A good Flamenco dancer - I can use him as a Mexican. But for Indians - we don't have the faces!
LDL: Why do you think the Italian Western came to an end?
DT: It was a too exploited genre. The audience was fed up, but I think that the end of the genre was also caused by Enzo Barboni. I mean parody films exault the subject - think of the Franci and Ingrassia movies. But when you take genre and subvert it; build up gags like Barboni did with TRINITY, you reach a point where there is nothing left to say.
Posted by William Connolly at 11:00 PM