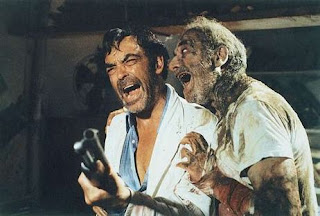 From: A Trilogy of Terror
An interview with Ian McCulloch
by Jason J. Slater & Marcelle Perks
Diabolik number 1 (1997)
I get the impression from ZOMBIE FLESH EATERS that Richard Johnson just didn't want to be there.
From the movie itself? I think he was a fantastic actor. When I first joined the Royal Shakespeare company, straight from university, I didn't know much about acting. I was told to go backstage to the back of the audience on every production to see what people were doing and how they were doing it. One of the shows was called THE DEVILS which Richard was doing and he was just fabulous and I saw him in about four other plays and he is a marvellous actor, immensely professional. I think he had a big success in a detective thing two years before ZOMBIE FLESH EATERS which had a huge success in Italy and I think he knew he could walk through the film. He knew that he could act for the film in a professional way. I mean he's a wonderful actor and he just gets on and does it in the same way as any other actor; he did anything he wanted to do, without thinking. He could have swamped everyone off screen with his acting, he had tremendous power and passion. I think Fulci was a little wary of Richard, he treated him with great respect, far more respect than any of us and I think he was also a little wary of me because he didn't know me or what I could do. I mean, I think I'm pretty awful in it.
Posted by William Connolly at 11:34 PM