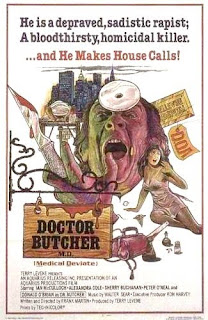 From: A Trilogy of Terror
An interview with Ian McCulloch
by Jason J. Slater & Marcelle Perks
Diabolik number 1 (1997)
The director of ZOMBIE HOLOCAUST was a veteran of Italian comedy television films. How was it to work with him in a horror movie? Did he find it difficult to work within such a genre?
This chap? (Ian points at the credits of a theatrical poster). Remind me what his name was.
Marino Girolami which is his real name instead of the pseudo Frank Martin.
Marino? He was just a really, really nice fellow. He was obviously quite old, you know. I take it he's dead now as well?
Yeah, he died in early '95.
He was much older than Fulci and he seemed to have a long career in making films. He was so straightforward, but he was also a bit of a bully, never to me but to the minions around who were supposed to be doing something they weren't doing right. You know, he was so much fun to talk to and it was great to have someone like that. We were driving through Rome one day and he said to me that (Ian points as to imitate Marino) "You see that statue over there? That's me." When Mussolini brought the Olympic Stadium in Rome, they had various statues of their athletes all over the place, and one of a boxer is Marino because he was at one time the European boxing champion (Note that the statue can also be seen in the weirdo documentary THE WILD WILD WORLD OF JAYNE MANSFIELD). But he was friendly, open and would talk to you. His English may have been not that good but it didn't matter to him. So against all odds, and although it was very silly, ZOMBIE HOLOCAUST turned out to be a far happier film than I expected.
[Marino Girolami was a much more experienced director than just a maker of Italian television comedies. 1962's L'IRA DI ACHILLE (aka THE FURY OF ACHILLES) was his 36th or 37th directing credit (depending on whose count you believe). When Richard Harrison introduced me to him, he said that Marino was the quickest film director of whom he knew; quick but good. In fact, he made films so quickly distributors asked him to credit other directors so as to not glut the market. He was responsible for a whole series of Westerns made in Spain credited to other guys: POCHI DOLLARI PER DJANGO (A FEW DOLLARS FOR DJANGO, credited to Leon Klimovsky and recently claimed by Marino's son Enzo G. Castellari who reused some footage for his first directoral credit SETTE WINCHESTER PER UN MASSACRO, aka PAYMENT IN BLOOD), ANCHE NEL WEST C'ERA UNA VOLTA DIO (aka BETWEEN GOD THE DEVIL AND A WINCHESTER, credited to Dario Silvestri by directed by Marino says star Richard Harrison) and REVERENDO COLT (aka REVEREND COLT, credited to Leon Klimovsky but directed by Marino says Harrison). Despite his diverse experience, his most popular successes in Italy were comedies such as PIERINO CONTRO TUTTI, which has recently been released in the U.S. on Mya DVD as DESIRABLE TEACHER. ZOMBIE HOLOCAUST was originally theatrically released in the U.S. as DOCTOR BUTCHER M.D. ]
Posted by William Connolly at 10:36 PM