Why a new Zorro TV series produced in Europe? 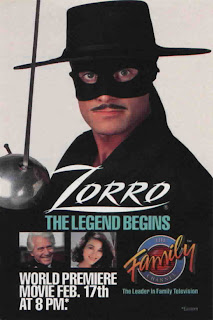 From: ZORRO UNMASKED
by Sandra Curtis
The old Disney series [starring Guy Williams] hit the airwaves in France, airing on FR-3 in 1985, causing a nationwide sensation. Zorro fever struck France with a force equal to the one that captivated Americans during the heyday of Dallas. The Disney show aired in the most desirable time slot in France, Friday night at nine o'clock. The interest spilled over to merchandising. Kiosks featured new comic strip Zorro stories in Edimonde's Le Journal de Mickey. Products ranging from puzzles to chocolates to bedsheets and everything in between were marketed.
Over the previous two years, John Gertz had been running the Zorro business part-time while he completed the coursework for his Ph. D. Nancy Larson continued screenwriting and was selected to attend the prestigious Sundance Institute to develop her film THE WIZARD OF LONELINESS. Gertz-Larson Productions had evolved into Zorro Productions, Inc. Now, two roads diverged before John. He could devote his energies full-time to reviving Zorro as a classic character, or he could write his doctoral dissertation. John took a year's leave of absence from school to see how he'd fare in the business world and saw the leave extend as he grew Zorro into a successful international property.
Riding the wave of success in Europe, Gertz interviewed agents in early 1987 to see if they could generate interest in a new live-action series. Along with Bob Cristani of the William Morris Agency, John pitched Nancy's treatment to seven production companies in two days. Twenty-four hours later, all seven came back with offers to do the show. They closed a deal with New World Television, which was willing to commit to a minimum of twenty-five episodes, the number required for European participation. A network sale would have been more lucrative but it also would have meant a limited production order. Gertz didn't want to see the show cancelled again after only five episodes. [Which is what happened to the Gertz-Larson Productions and Walt Disney Studios series Zorro and Son for CBS-TV back in 1983.]
Posted by William Connolly at 9:35 PM