4. The Totò Phenomenon part one 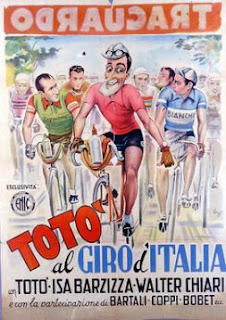 by Ernesto G. Laura - Compiled by A.N.I.C.A. (National Association of Motion Pictures and Affiliated Industries) Rome, Italy - Edited by CIES Soc. Coop. r.1 (Institute for the Promotion of Italian Motion Pictures Abroad) Rome, Italy under the auspices of the Ministry of Tourism and Entertainment
The success of the Italian-style film comedy would come to depend upon the presence of well-known and popular actors. In the beginning this was not the case: as has been seen, neither DUE SOLDI DI SPERANZA (TWO CENTS OF HOPE) nor POVERI MA BELLI (POOR, BUT GOOD-LOOKING) subscribed to the star system. After the short-lived "case" of Macario, who soon returned to the ranks of the comic film and then moved down to supporting roles, the first name around which could be built, in the early '50s, a long series of film comedies was that of Totò.
Totò (Antonio De Curtis, 1898-1967) was not a new name, either on stage or in movies. He had started in the shoddy vaudeville theaters of Naples and slowly graduated from the music hall to the big stage revues, where he had already become popular in the '30s, with Anna Magnani as his partner. His body was extraordinarily double-jointed and he possessed a highly mobile face with round eyes and a crooked chin. He would appear on stage in a morning coat and a bowler hat, with the trousers slightly too short, and in contrast to this all-told "dignified" appearance he would go through movements that grew more and more mechanical and jerky and turned him into a sort of marionette. In the days when comics made people laugh with the quality of their jokes and wise cracks, Totò was first of all a mime and performed with his body in constant, free improvisation.
These mimetic characteristics made him particularly suited to the movies, for which he made a number of fly-by-night films beginning in 1937. However, the number one star among comedians was Macario and until that star began to decline, Totò remained in the shadows of a moderate success, a restricted popularity. His fame exploded in 1948 with FIFA E ARENA (FUNK AND SAND), a farce directed by Mario Mattoli on the old theme of bull fights and toreadors. It is clear that farce, slapstick comedy lies outside our present subject, but TOTO AL GIRO D'ITALIA (TOTO AT THE TOUR OF ITALY), also from 1948, moves beyond the farce and is a real comedy and very well constructed. Along with soccer, bicycle riding was the most popular spot in Italy at that time. During the "Giro d'Italia," the big race that circled all of Italy in succeeding laps, newspapers came out in special evening editions to report the order of arrival of each lap. The rivalry between the two champions, Gino Bartali and Fausto Coppi, sent crowds of fans into delirium. Mattoli got the idea of taking several documentary sequences of the real Giro d'Italia, with the participation of the most famous racers, and grafting onto it an imaginary story, cast in a surreal style of humor, a humor of the absurd. Totò was, in fact, a "gregario," that is one of those cyclists who ride along in the team to give the champions a hand, but who never win a race and almost never even a lap. Latter-day Faust, he makes a pact with the devil and starts winning one race after the other. A charming comedy, wonderfully quick in pace, with a pleasantly bourgeois devil (Veneto actor Carlo Micheluzzi), it revealed just how talented Totò could be if confronted with roles that were diversified and richly articulated.
Posted by William Connolly at 10:31 AM