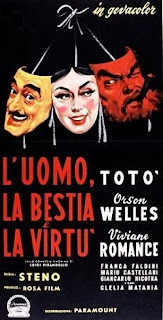 Steno brought together Totò's instinctive talents and the great threater of Pirandello, bringing him to the screen in the role of the mild-mannered Professor Paolino in L'UOMO, LA BESTIA E LA VIRTU (MAN, BEAST AND VIRTUE: 1953), the script was written in collaboration with Vitaliano Brancati. Inspired in turn by one of Pirandello's short stories, the play, written in 1919, belongs to the light, satirical output of the great Sicilian writer, who set a serious, sedate professor (Totò, of course) against a coarse, impetuous sea captain (Orson Welles) with a sensual and enticing wife (Viviane Romance). A story of adultery, to be sure, but one which Pirandello succeeds in endowing with deeper references and meanings, unfortunately lost in the film which, even so, offers a magnificent contest of acting between three "holy monsters" from three different cinematographic "schools". But the best Pirandello brought to the screen by Totò is the one-act LA PATENTE (THE LICENSE), included in the episode film, QUESTA E LA VITA (THIS IS LIFE: 1954) by Mario Soldati. In order to appreciate the bitter humor of the play, one must understand what the "jella" ("evil eye") means to a superstitious Southern Italian. It's bad luck, yes, but bad luck raised to the level of a supernatural, metaphysical curse, one that is transmitted to others by abominable carriers, who are known, in fact, as "jettatori" ("Jonahs"). Rosario Chiarchiari has the reputation in town of being a "jettatore," thanks to which he is no longer able to find work and is shunned by everybody. So he decides to sue one of his slanderers for calumny. But to the judge's great surprise, Rosario brings to the lawyer of the opposing party all the proofs of incidents and circumstances which confirm his fame as a "jettatore" and which will acquit the slanderer. The sentence of acquittal will represent for Rosario a sort of "license" which makes him an official "jettatore". And since he can no longer find work, with that "license" he goes and stands outside of stores and offices and makes them pay him to go away, to remove the "evil eye". In Totò's hands, the portrait of this bizarre figure takes on nuances of sublime levity and mirth, also physically, but without sacrificing the profound sadness that underlies the "mask" of folly.

Posted by William Connolly at 12:27 PM