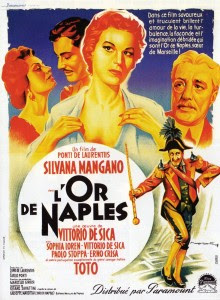 In the wake of the two "Zibaldoni" of Alessandro Blasetti, episode films flooded the Italian market in the '50s. Vittorio De Sica, after the austere and desperate UMBERTO D., tried to apply his human curiosity as a tireless explorer of social "spaces" to a film of broad box-office appeal. So turning to a story by Cesare Zavattini, he came up with STAZIONE TERMINI, or as it was called in the United States, INDISCRETIONS OF AN AMERICAN WIFE (1953), which, centered around a couple of Americans lost in the confusion of the main station of Rome (Jennifer Jones and Montgomery Clift), should have resulted in a broad, teeming, but unified canvas of a microcosm like a railroad station in a big city. Despite the blessing of a script signed by people like Zavattini, Luigi Chiarini, Giorgio Prosperi with dialogue by Truman Capote, the film ended as a sum total of little sketches, of fleeting, often negligible portraits, without being convincing.

Much more successful in its results was the following L'ORO DI NAPOLI (THE GOLD OF NAPLES: 1956), based on several stories from a charming book by Giuseppe Marotto, a Neapolitan writer who had settled in Milan and had been one of the main figures responsible for the success of the humorous journals, and who succeeded in creating an image, now festive, now suddenly sad, but always colorful and lively, of his beloved Naples. Suffice it to remember the first episode, with a Totò more jerky and puppet-like than ever, immortalizing on the screen the figure of the "pazzariello" (who wander the streets eccentrically dressed playing cymbals and drums to earn a few pennies from the crowd). Equally memorable I giocatori (The Gamblers), the story in which Vittorio De Sica, an inveterate gambler and bettor who has seen better days, is reduced to gambling with a little boy, who naturally ends up winning. Pizze a credito (Pizzas On Credit), lastly, established the role that for a long time remained identified with Sophia Loren, namely the "pizzaiola", a beautiful, sexy plebeian, a character that was to reappear in other films.

Posted by William Connolly at 12:25 PM