5. The Episode Films part one 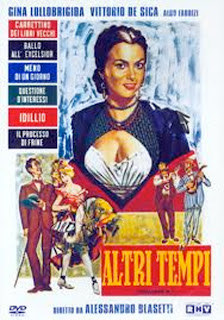 The episode film is not very popular today on the international scene. In Italy, instead, it has occupied a rather important place over the last thirty years, especially in the field of comedy.

Aside from the advantages of a commercial nature that can be brought forward, it is also true that the short story pertains to an uninterrupted and glorious tradition in Italian literature, from the DECAMERON of Giovanni Boccaccio to the NOVELLE PER UN ANNO (SHORT STORIES FOR A YEAR) by Luigi Pirandello.

It has been seen that the first examples of an episode film that sought to establish an Italian model was in recent times no less a classic than PAISA by Rossellini. The same Rossellini would divide the poetic FRANCESCO GIULLARE DI DIO (FRANCIS, JESTER OF GOD: 1950) into seperate chapters.

Alessandro Blasetti, with his passionate and polemical nature, was fighting, at the decline of the neo-realistic season for a return to "literary" films, based that is on the great works of Italian and foreign fiction. Thus came into being, one after another, ALTRI TEMPI (OLDEN TIMES: 1952) and TEMPI NOSTRI (OUR TIMES: 1954), which was sub-titled Zibaldone No. 1 and No. 2 ("zibaldone" in Italian means "anthology," but in using, rather tongue-in-cheek, this high-sounding term, the director was referring back to a famous work by Giacomo Leopardi, the greatest 19th century Italian poet).

Following the tenuous story-line of an itinerant bookseller who craves the literature of the past (Aldo Fabrizi) and offers passers by second-hand books from his stand, the various episodes unfold, situated between the 18th and early 19th century in a loving tribute that moves from the dramatic to the comic, depending on the texts taken from writers like Edmondo De Amicis, Camillo Boito, Renato Fucini, Guido Nobili and Edoardo Scarfoglio. A story by the latter writer, Il processo di Frine (Frine's Trial), provides the basis of the most amusing episode, where Gina Lollobrigida is a beautiful peasant girl on trial for poisoning, whom the lawyer for the defense, a historonic Vittorio De Sica, succeeds in getting acquitted, basing his defense exclusively on her sex appeal. TEMPI NOSTRI (OUR TIMES) followed the same plan, but utilizing only writers of this century: Mario Moretti, Alberto Moravia, Vasco Patrolini, Achille Campanile, Ercole Patti, Silvio D'Arzo, Anton Germano Rossi, Giuseppe Marotta. Particularly exhilirating the short episodes based on humorous stories, like Il bacio (The Kiss), taken from Campanile, where two lovebirds make arrangements to meet at the station, the only place where it is "lawful" to kiss, pretending to leave; Il pupo (The Kid), from Moravia, which Marcello Mastroianni and Lea Padovani, as two parents who "forget" their baby on the threshold of a church; La macchina fotografica (The Camera), written by Age and Scarpelli with Sandro Continenza, with a riotous Totò involved in photographing Sophia Loren. Immediately after, Blasetti would turn to a Moravia short story for PECCATO CHE SIA UNA CANAGLIA (A PITY SHE'S A SCOUNDREL: 1955) about an honest young Roman boy, Mastroianni, madly in love with a gorgeous girl with the slight drawback of being a professional thief (Sophia Loren), the daughter of a Vittorio De Sica, who is a positive virtuoso of the "profession." The director would return to episode films in 1965 with IO, IO, IO... E GLI ALTRI (ME, ME, ME... AND THE OTHERS), which is a sort of "lecture with examples" on human selfishness.

Posted by William Connolly at 9:53 AM