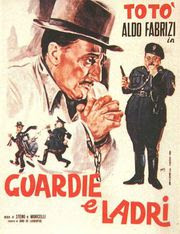 From: COMEDY ITALIAN STYLE
by Ernesto G. Laura - Compiled by A.N.I.C.A. (National Association of Motion Pictures and Affiliated Industries) Rome, Italy - Edited by CIES Soc. Coop. r.1 (Institute for the Promotion of Italian Motion Pictures Abroad) Rome, Italy under the auspices of the Ministry of Tourism and Entertainment
Unfortunately, it was easier and more convenient to exploit Totò in low-budget slap-dash films, based entirely on his skills as an improviser and the sex-appeal of the starlet called in for the occasion. The actor himself contributed to this self-devaluation, by accepting all his life everything that was offered him, without stopping to choose, passing from the cheap "flicker" to the masterpiece. But this extraordinary "show animal" was too gifted to be ignored by directors endowed with personality and ideas. So, however numerous the farces, there were also comedies, with real character, well-studied situations, stories that were not mere pretexts.
Two filmmakers, Steno (Stefano Vanzina, 1915) and Mario Monicelli (1915), who had come from the humorous weeklies and while waiting to direct a film had worked together as scriptwriters, set their eyes on Totò with the idea of turning him into the new hero of civil and social satire.
Scriptwriters are the key to understanding the continuity of development of the Italian-style film comedy. Steno and Monicelli had written the script for the triptych directed by Borghesio with Macario about the common little man in the war and after. Steno by himself had already worked for Totò on the script for FIFA E ARENA (FUNK AND SAND) and TOTO AL GIRO D'ITALIA (TOTO AT THE TOUR OF ITALY).
TOTO CERCA CASA (TOTO HOUSE-HUNTING) of 1949 is their "Opus One" as directors and though the difficulty of finding a house offered humorous possibilities, it also entailed a certain openness to the social problems of Rome, like countless other Italian cities. TOTO E I RE DI ROMA (TOTO AND THE KING OF ROME: 1951) is already more complex. To focalize the daily misadventures of a small-time civil servant, Dino Risi and Ennio De Concini, the authors of the book (the script was written by the directors, Steno and Monicelli, themselves), took their inspiration from two short stories by Anton Chekhov, The Death Of The Civil Servant and Promotion Exams. The two directors offered the actor wonderful opportunities to show off his paradoxical humor, for example in the sequence where Totò arranges for and announces his own funeral. GUARDIE E LADRI (COPS AND ROBBERS: 1951), Steno and Monicelli's third film with the Neapolitan comedian, cuts much closer to the quick of the social fabric. The main character is a thief, not an Arsene Lupin of course, but a small-time chicken thief who has a family to support and finds no way to make ends meet except by stealing. He is pursued by a big, gruff cop whom the thief always manages to get away from. The script of the story by Piero Tellini was written by two perceptive and subtle writers, specialists in the criticism of social conventions, scathing critics of hypocrisy and outward conformity: Vitaliano Brancati and Ennio Flaiano. The skirmishes between the cop - Aldo Fabrizi - and robber - Totò - are rooted in an old tradition of the great comic cinema: think of the candid Charlie Chaplin being chased by the husky and belligerent Keystone Cops. Steno and Monicelli set this tradition into suburban working-class Rome and humanized both the cop and the robber, confined by circumstances to their seperate roles but actually holding a soft spot for each other that verges on friendship, so that in the end the robber, before letting himself be handcuffed, hands his family over to the cop for safe keeping. GUARDIE E LADRI (COPS AND ROBBERS) won the prize for the best script at the 1952 Cannes Festival. TOTO E CAROLINA (TOTO AND CAROLINA: 1953), directed by Mario Monicelli alone, also moves in the line of social paradox. This time the involuntary friendship grows up between a cop - Totò - and a prostitute in an unconventional story whose humor is tinged with simmering bitterness. The story was by the writer Ennio Flaiano, the script by Flaiano, Monicelli and Rodolfo Sonego. A few years later, in 1960, Monicelli would give Totò another important opportunity with RISATE DI GIOIA (LAUGHS OF JOY), written by Suso Cecchi D'Amico, Age, Furio Scarpelli and Monicelli on the basis of a short story by Alberto Moravia. Concentrated into the span of a few hours on New Year's Eve, it describes the disillusionments of a film-extra from Cinecitta, Anna Magnani, and an old sutor of her's, Totò, during a dance, where they are snubbed by high society. Two American actors, Ben Gazzara and Fred Clark, also took part in the film.
Posted by William Connolly at 12:03 PM