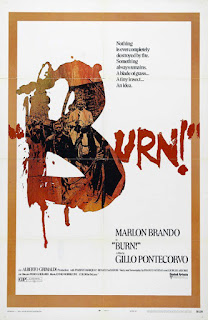 On September 8, 1966, Battle of Algiers, directed by Gillo Pontecorvo, premiered in Italy. Twelve days later, the film was first shown in the United States. The work was received with great acclaim, but it was also greeted with condemnation. It won the Golden Lion at the Venice Film Festival and was nominated for a number of Academy Awards including Best Foreign Film. Nonetheless, it was banned in France for its all too sympathetic portrayal of the FLN. Today, the film is listed as #120 on Empire Magazine’s list of 500 greatest films of all time.Its importance in the history of film is without question. The film excites the popular imagination more perhaps for the legends that have grown up around it -- such as having been screened by the Black Panthers and the Provisional IRA as well as by military and civilian officials of the Pentagon (following a declaration of “mission accomplished” in Iraq) -- than for its actual content. Let us make no mistake: the film is brutal, incendiary, brilliant. Employing a cinema vérité style and a cast consisting almost entirely of non-professional actors, Battle of  Algiers depicts the French colonizers and the FLN as equally vicious combatants in the struggle for control over Algeria. And that may be the work’s most troubling feature: the balance inwhich it presents the two sides.
This stunning work of agitprop would stand as Pontecorvo’s final word on the subject of colonialism, except that it isn’t. Three years later, Pontecorvo completed another film on the same subject: Burn! (also known as Queimada); to eliminate some confusion, I will refer to the film by its English title to distinguish it from the island setting: Queimada. Though this film stars Marlon Brando, Burn! has not enjoyed the same reputation as Battle of Algiers.However, Pontecorvo’s examination, depiction, and, ultimately, condemnation of colonialism in the later work is more pronounced and more profound than in Battle of Algiers because he so carefully delineates the different strains of European expansionist behavior. I submit to you, therefore, that Burn! – despite, or even perhaps because of its flaw – is equally deserving of our admiration as a vital piece of emergent political cinema. 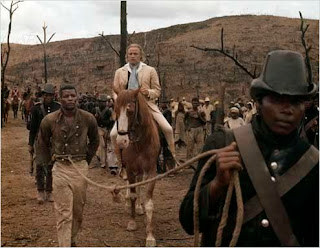 Briefly, Burn! is set on the fictional island of Queimada. It has been colonized by the Portuguese, who originally used the indigenous population as slaves. When those slavesrevolted, the colonizers implemented a scorched-earth policy and burned the island’s vegetation killing that indigenous population. Slaves were then brought from Africa to work the sugar fields. The film begins in the 1830’s when Sir William Walker, an agent of the British Navy, arrives to serve as an advisor to instigate a revolution against the Portuguese. He finds the mulatto population, led by Terry Sanchez (Italian actor Renato Salvatori in blackface), ill equipped for the task. Instead, he elicits the aid of poor illiterate slave Jose Dolores (as is Pontecorvo’s habit, non-actor Evaristo Marquez was hired for the role). Between Dolores’ military pressure out in the countryside and Sanchez’s conspiracy in the capital, the Portuguese are overthrown. Walker convinces Dolores that Sanchez is the more capable administrator and leaves the island with the latter in charge of the government. Ten years pass. It is 1848, a date with obvious political significance. Walker, now a representative of the Royal Sugar Company, returns to Queimada to suppress a revolt led by Dolores against Sanchez. Walker has Sanchez killed by his own military and hunts down Dolores, who is also executed. Walker is assassinated as he prepares to return home. Queimada may now be firmly under British control, but the revolution lives on. 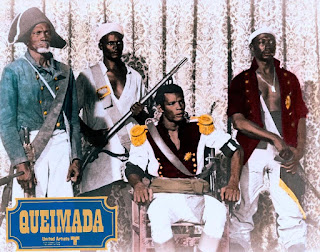 It should come as no surprise that Burn! was not initially well-received by the critical press. An illustrative review from the time of the film’s release (1970 in the United States) belongs to Stanley Kaufmann writing for The New Republic: “No such importance (however your view it) is likely to attach to Pontecorvo’s new film Burn!, although it was clearly bucking to be another revolutionary hymn. It was carelessly made and has evidently been shoved and jostled in its final editing. The result is that its spine is broken in several places, and it can only wobble lamely to a revolutionary stance.” i Kaufmann is correct that there were production problems during and after filming – the specifics of which I will focus upon shortly -- but theknowledge that there were production and post-production factors beyond Pontecorvo’s control do not prevent the critic from concluding: “I had some reservations about The Battle of Algiers in terms of its fundamental purpose, but it was so brilliantly made. Such questions can’t arise about Burn! because it is so badly made.” ii
Pauline Kael, long-time critic for The New Yorker, was in the minority back in 1970. She deemed the film “luxuriant” and an “ecstatic epic”. iii Kael also correctly pointed to some of the production’s trouble: “[Burn!] might have reached a much wider audience if the Spanish government, sensitive about Spaniards being cast as heavies, hadn’t applied economic pressure against the production, United Artists. So parts of this picture were deleted and others reshot, and the Spaniards, who had traditionally dominated the Antilles, were replaced by the Portuguese, who hadn’t but aren’t a big movie market. After these delays the picture was given a nervous, half-hearted release.” iv Part of that nervousness was a result of releasing a film with clear anti-colonial sentiments to a public weary of the Vietnam War; Hollywood in general had difficulties addressing issues concerning the Vietnam War during the time of the war and, in fact, while Burn! was in production Warner Brothers released the pro-war John Wayne vehicle The Green Berets. Added to that, the temperamental star and temperamental director had a very public feud which Brando himself described as “Homeric”. v The production troubles and the made-for-tabloid fights provided critics with cover. Kaufmann takes on the role of Gertrude in Act IV of Hamlet; there is no need to listen to the truth of the message because somehow the messenger is flawed.
But when all is said and done Burn! is a work of subversive art. There should be no surprise in saying this. But it is subversive in three distinct respects. First, it is politically subversive. Pontecorvo and his screenwriting collaborator Franco Solinas – who also worked on Battle of Algiers – held Frantz Fanon, and in particular The Wretched of the Earth, in high esteem; they deployed Fanonian ideals in creating both Battle of Algiers and Burn! And as such,it initially appears that Kaufmann might indeed be right. If Burn! merely walks in the shadow of  Battle of Algiers, what need do we have for it at all? But there is need for it because its ambitions are that much greater than Battle of Algiers. Burn! not only challenges traditional colonial hegemony but neo-imperialist strategies as well. 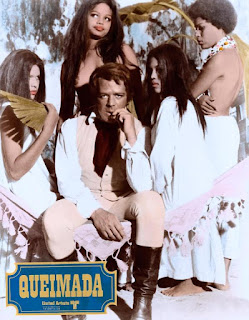 Nonetheless, Celli misses a key element of the assassination. Fanon states in The Wretched of the Earth: “The appearance of the settler has meant in the terms of syncretism the death of the aboriginal society, cultural lethargy, and the petrification of individuals. For the native, life can only spring up again out of the rotting corpse of the settler.”x The governor’s corpse and the settler’s corpse are one and the same. And with his death, the life of the slave population seems to emerge anew, however temporarily. 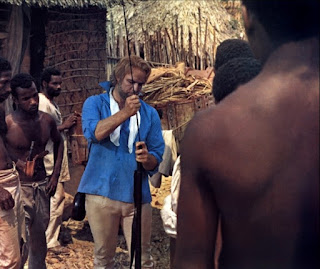