"Then Marlon charged the director with paying the black extras less money than he paid the whites and supplying them with inferior food. He discovered that a wardrobe woman's son was feverish and had vomited a hookworm after lunch. She told Marlon that Pontecorvo wanted to finish the shot before the child was treated. Marlon screamed at a chaufeur, 'Take the kid to the fucking hospital right now.' As the car drove off, Marlon told a reporter later, 'If Pontecorvo had been taller, I would have fucking fought with him. I really would have punched the guy out.' From that day on, Pontecorvo carried a gun. 'He laughed, but actually he did have a gun on his belt,' Marlon said. Pontecorvo revealed a superstitious streak that further irritated Marlon: The director carried lucky charms in his pockets, refused to discuss the picture on Thursdays, ordered everybody wearing purple off his set, and wouldn't allow red wine to be served at lunch.
"Pontecorvo denies that he mishandled the extras. He said that, according to Italian rules, there were three categories of such players, and they were always paid three different salaries. Naturally, he added, the lowest-paid category was for the blacks in the crowd scenes. Pontecorvo insists that he was not influenced in the least by racist feelings. Pontecorvo adds that Marlon 'would be furious with me if I raised my voice in anger when a black extra was incompetent. But I felt that I should treat incompetence in a black man and white with equal firmness.'
"With only a few days left to shoot, and more than sixty days missed due to his absences, Marlton walked out of QUEIMADA after a particularly violent quarrel. Producer and director were left in an impossible position, with a huge financial commitment and an unfinished movie. Weeks went by. Producer Alberto Grimaldi pleaded with Marlon to return. But he flatly refused to return to Colombia under any circumstances. After discussing several possibilities, Grimaldi settled on Morocco, of all places, as the new location. At least if was dry. Marlon finally yielded and agreed to return to work there. It was a nightmare trying to create an environment exactly identical to that found in the wilds of South America. 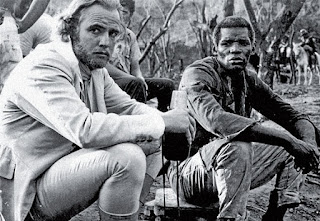 "In Marrakesh, a partial reconciliation took place between director and star, and the best scene in the picture was shot there. That was the sequence in which Sir William Walker tried to convince Jose Delores to choose his freedom. A morning went by with nothing accomplished. The dialogue was too lengthy, and the exposition boring. Finally, Pontecorvo hit on the idea of cutting the dialogue to a minimum and using Bach's partita 'Come Sweet Death' as the emotional acommpaniment to the lines. When the shooting recommenced after lunch, Pontecorvo, without warning Marlon, had someone put on the record. Pontecorvo said, 'Since Brando is like a ultra-sensitive animal, he was so moved by the music that he performed one of the most extraordinary scenes he ever played. The entire crew was moved to tears, and exploded into applause. Brando was stunned, and according to Marcello Gatti, he and Pontecorvo embraced each other at the end of this extraordinary scene. Pontecorvo, however, denies this, additing, 'When Marlon and I parted in Marrakesh, we didn't even say good-bye.' Later, when Marlon saw the film, in a gesture of forgiveness, he invited Pontecorvo to Hollywood to discuss a possible film about American Indians, WOUNDED KNEE. That project never came to fruition."
Posted by William Connolly at 10:04 PM