The Co-Screenwriter of BURN!

From: "Franco Solinas and the Commie Cowboys" by William Connolly in Spaghetti Cinema #3, December 1984 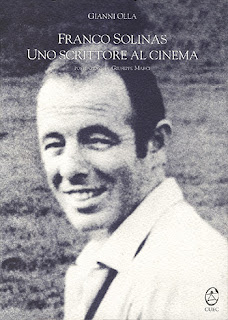 [Prior to writing BURN!, Franco Solinas worked on the scripts for LA BATTAGLIA DI ALGERI aka THE BATTLE OF ALGIERS, QUIEN SABE? aka A BULLET FOR THE GENERAL, LA RESA DEI CONTI aka THE BIG GUNDOWN, IL MERCENARIO aka THE MERCENARY and TEPEPA.] 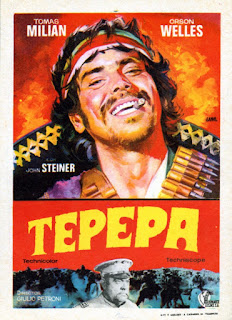 "It is in the character of Tepepa that I find an answer to the question of whether Franco Solinas is an artist or a propagandist. For the earlier films, the main characters had been written inorder to flesh out the central thematic conflicts. El Chuncho of QUIEN SABE? must be an undecided man inorder to be the focal point of the conflict between Santo's philosphy and Tate's. Cuchillo has to be a vivacious little thief inorder to contrast with Brokston's corrupt Railroad giant. Inorder for the theme of post-revolution disillusionment to work, Tepepa has to be shown as a sincere 'man of the people', but the character written here goes way beyond mere thematic dictates. Tepepa can be playfully child-like one moment, scarily vindictive the next, and soberly mature when needs demand. Tomas Milian has always been one of the best actors to appear in Italian Westerns, and his performance here is thrilling. The marriage between the written character and the actor's performance creates an enlightening portrait of a human being trying to create a better future, while battling disillusionment and trying to live with past mistakes. Creating a moving, multidimensional portrait of a human being is what I call the act of an artist. 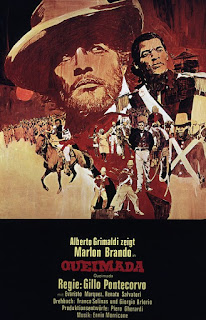 "Solinas, co-writer Giorgio Arlorio (who also worked on THE MERCENARY), and director Gillo Pontecorvo create another equally rich characterization in BURN! (originally titled QUIEMADA, 1970), this time with actor Marlon Brando. In what is easily my favorite performance by this celebrated American actor, Brando plays Sir William Walker, an adventurer working as a secret agent for the British government in the early 19th century. Walker arrives on the Portugese controlled Caribbean island of Quiemada (which means Burn) inorder to wreck the sugar monopoly. He brutalizes a young Black named Jose Delores (Evaristo Marquiez), and when the slave pulls a knife to fight back, Walker knows he has his pawn. After getting Delores and his friends to rob a bank, Walker informs the soldiers where to find them. Facing execution if captured, Delores and his men willingly learn the use of firearms, and in fighting, Walker turns the Black man into a revolutionary liberator. Since the slaves far outnumber the Whites on the island, Walker has little trouble in negotiating a peace with the island's plantation owners, ensuring a lucrative trade for England. Having seized control of the government, Jose Delores is unwilling at first to relinquish control to Teddy Sanchez (Renato Salvatori), a mulatto clerk whom Walker has chosen to run the island. But, after Walker illustrates how ill-equipped the Black is for handling the details (and paperwork) of government, Delores gives over his sword to Sanchez. Walker goes back to England.
"After ten years of inactivity, Walker has become a lout, taken to drunken brawls in taverns. Then one day, representatives from the British government seek him out. Jose Delores has called the slaves, now low paid employees, to revolt again, and because he had created this revolutionary, Walker is the man to put down this uprising. 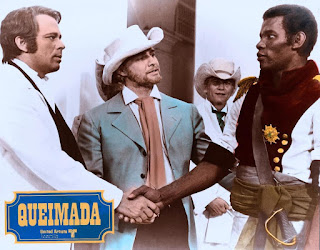 "Pauline Kael, I think rightly, has identified the character of Sir William Walker as an elaboration of the French Colonel in THE BATTLE OF ALGIERS. Walker understands the whys and hows of revolution, but is too much of a cynic to believe in it. Having been the one to teach Jose Delores how to be a fighter, Walker is unable to understand why the Black hates him now that they are playing on opposite sides of the game. Of course, to Delores, it is not a game; it is a struggle for dignity.
"During the production of BURN!, there were many stories in the press of conflict between director Pontecorvo and star Brando. The director had pushed the star until he got what he wanted. (One report told of 50 takes of a simple action.) In light of the non-performance by the non-actor Evaristo Marquez as Jose Delores, this might seem unreasonable, but from seeing the results, it was possibly justified. Walker is the central figure of the film, and his personal conflict is its story. Brando's performance is taut and powerful, showing none of the flabby self-indulgence that has plagued his work for years before, and since. This may be his last great performance.
"Aside from the marvlous action scenes and clearly thought-out plotting, the scripts Solinas collaborated on for TEPEPA and BURN!  remain his best work due to their well developed lead characters."
Posted by William Connolly at 10:29 PM