Brando Has Trouble With His Co-star On BURN! 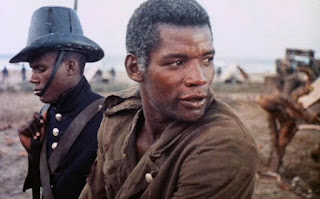 "At first as the shooting began in torrid conditions near Cartagena, on mountain roads that crumbled into chasms, the relationship between director and star was good. But the language barrier soon became a problem. Marlon spoke very little Italian, despite  his sojourn there during REFLECTIONS IN A GOLDEN EYE, and Pontecorvo was not fluent in English, and was baffled by American terminology. The two men unsuccessfully tried to converse in French before they finally gave up and resorted to an interpreter. Pontecorvo said, 'We ended up missing out on essential nuances and created misunderstandings which in the long run contributed to the creation of great tensions and the
deterioration of our relationship.' In those early weeks, Marlon, according to the director, 'showed real professionalism and cooperation, despite all of the difficulties of working under torrid conditions of subtropical Colombia amid the noise and confusion of an Italian production and with non-professionals as actors and extras.' The second lead was played by an illiterate Colombian black named Evaristo Marquez. A magnificent physical specimen, Marquez had been discovered by the director when he saw Marquez stripped to the waist, riding a galloping horse through a rain forest. Pontecorvo decided then and there to hire this man for the part of the powerful dock worker
Jose Delores, who becomes a revolutionary under Sir William Walker's influence. 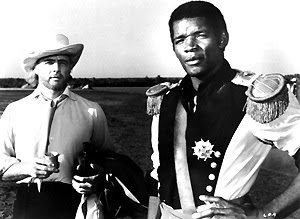 "At first, Marlon not only accepted this untrained actor but also helped him a lot in his performance. 'Marquez,' Pontecorvo said, 'had to speak in sounds which could produce lip movements similar to English, but since he didn't even have an idea of what dialog was, Marlon would put his hand on Evaristo's shoulder or knee in order to give him the cues for his lines. He went even further: He stood behind the camera and mimicked the facial expressions for Evaristo to imitate.'
"The misunderstandings between Marlon and Pontecorvo inevitably increased, and the situation affected Marlon's attitude towards Marquez. Pontecorvo said, 'He became impatient and demanded I substitute someone for Evaristo. I told him he would have a week's trial. In which I would shoot with him alone, without Marquez.' Meanwhile, Pontecorvo's wife and an assistant coached the untried actor off-set, and the director decided that after a week, they would decided whether to keep him or take on another actor. Finally, they decided to keep Marquez. And, Pontecorvo said, 'Marlon went into a rage and kep insisting that both of us would have to pay for the consequences. He didn't forgive me, and started seeing me as a monster.'"
Posted by William Connolly at 5:51 PM