Brando Signs Onto BURN! With Enthusiasm 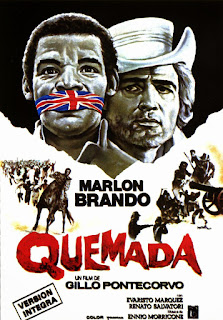 "(In 1968, Brando)... told the United Press that his new policy was only to make movies that were of 'appropriate significance.' so when Italian director Gillo Pontecorvo began planning to make QUEIMADA, later retitled BURN!, a film about a seventeeth century revolution in the Caribbean, the project seemed natural for Marlon. It was the story of Sir William Walker, a British government agent who arrives on the fictitious island of Queimada to bring about a revolution that will replace the Portuguese colonial despotism with a no less reprehensible British equivalent. Pontecorvo said, 'I wanted Brando for the part of Sir William. I was convinced he was the greatest actor the cinema ever had. And this conviction was strengthened now. His capacity of expression added to his facial mobility and somatic features were unique... He was the only actor in the world who was capable of laughing with one eye and weeping with the other.'
"However, Pontecorvo had a severe struggle to secure Marlon for the role of Walker. He went to United Artists for backing, but they were extremely reluctant. Following the series of box-office flops that included REFLECTIONS IN A GOLDEN EYE and THE NIGHT OF THE FOLLOWING DAY, Marlon was no longer considered bankable. While the director's struggle with UA continued, he met with Marlon at Mulholland. Marlon has seen and admired Pontecorvo's brilliant left-wing, anti-French THE BATTLE OF ALGIERS. Pontecorvo's script wasn't ready, but he told Marlon the story, and before he was even finished, Marlon agreed to take the part of Sir. William. 'Our political ideas were in the same sphere,' Pontecorvo said. 'While I am an independent Italian left-wing thinker, he is an American independent left-winger. We both liked the idea of an ideological adventure film. He completely agreed with the ideas behind it. He was concerned with the idea of film as a medium serving a political purpose.' United Artists was eventually convinced to gamble on Marlon, and Alberto Grimaldi became the producer of the picture. Marlon was offered and accepted $750,000 as his fee. 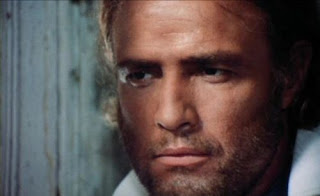 "Sir William Walker, with his constant scheming, his steady disintegration into corruption, alcoholism, and breakdown, was a part Marlon could certainly get his teeth into. He approved the decision to shoot the picture on location in the mountains and junbles of Colombia, South America, using local facilities in Cartagena. He was aware that making QUEIMADA the summer would be difficult given the heat and rugged terrain, but those conditions did not lessen his commitment to his impassioned director.
"On his way to Cartagena from Miami, he boarded National Airlines Flight 64. He had grown a long beard, shoulder-length hair, and a pigtail. As he got onto the plane, he said, jokingly, to a stewardess, 'Is this the flight to Havana?' Suspecting that he might be a hijacker, the stewardess immediatly reported to the captain. Neither recognized Marlon, and as a result, the captain insisted he leave the plane at once. He was furious, but the plane took off at 12:15 A.M. without him. Twenty-four hours earlier, another National Airlines flight had been hijacked and flown to Cuba with thirty-five people aboard.
"Extremely angry, Marlon managed to find a flight to Jamaica, where he boarded another plane for Colombia."
(This story about Marlon getting thrown off a flight for making a joke about going to Havana is told differently in BRANDO SONGS MY MOTHER TAUGHT ME. In that book, this incident occured not as Brando was initially traveling to Colombia, but as he was returning to the set after taking an unscheduled vacation. And in his autobiography, Brando delighted in getting thrown off the flight because it gave him an excuse to prolong his vacation.)
Posted by William Connolly at 9:14 PM