Marlon Brando and the First Day of Production on BURN! 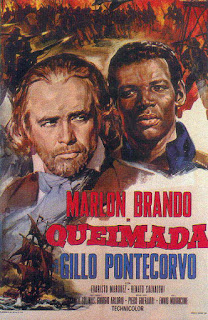 "Aside from Elia Kazan and Bernardo Bertolucci, the best director I worked with was Gillo Pontecorvo, even though we nearly killed each other. He directed me in a 1968 film that practically no one saw. Originally called QUEIMADA!, it was released as BURN! I played an English spy, Sir. William Walker, who symbolized all the evils perpetrated by the European powers on their colonies during the nineteenth century. There were a lot of parallels to Vietnam, and the movie portrayed the universal theme of the strong exploiting the weak. I think I did the best acting I've ever done in that picture, but few people came to see it.
"Gillo had made a film I liked, THE BATTLE OF ALGIERS, and was one of the few great filmmakers I knew. He is an extraordinarily talented, gifted man, but during most of our time together we were at each other's throats. We spent six months in Colombia, mostly in Cartagena, a humid, tropical city about 11 degrees from the equator and not far, I thought, from the gateway to Hades. Most days the temperature was over 103 degrees, and the humidity made the set a Turkish bath. 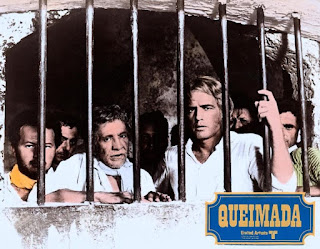 "Gillo's first shot was from the window of a tiny cubicle, supposedly a prison cell in an old fort, with the camera looking down on a courtyard where a prisoner was being garroted. When I saw that Gillo was wearing a long, heavy winter overcoat despite the hear, I couldn't believe it. With the movie lights blazing, it must have been over 130 degrees in the room. But he filmed take after take and never removed his overcoat.
"'Gillo,' I finally asked, 'why are you wearing that heavy coat?' He was drenched in sweat. 'Gillo, why don't you take it off?'
"He shrugged, pulled his collar up, looked around and said in French, 'I feel a little chilly, I don't know why. I'm afraid I might get a cold.'
"'That coat's not going to help you. If you're ill there's no sense in weakening yourself more by losing all that fluid.'
"'I'll be all right,' he said and turned away.
"I walked over to one of the members of the crew and said, 'Unless he's getting the flu, he's doing something very strange. He'll exhaust himself and pass out from the loss of so much perspiration.'
"During the next break, Gillo came outside and I noticed that he was wearing a pair of brief blue trunks underneath the overcoat. An odd combination, I thought, swimming trunks and an overcoat in this heat? While I was watching him, he pulled a handful of small objects from one pocket of the coat and shifted them to the other. I went over and asked him, 'What are those?'
"'Do you believe in luck?' Gillo asked.
"'You mean fate?'
"'Luck, fortuna.'
"'I don't know,' I said. 'I guess so. Some days you feel lucky, some days you don't.'
"He dug into his pocket and pulled out a small piece of plastic that looked like a curly red chile pepper. 'What is that?' I asked.
"'A little something for good luck. Touch it,' he said, adding that it would bring good luck to the picture.
"I did, and asked where his good luck charm came from.
"'Italia.'
"'What do charms like that cost?'
"'Nothing.' He reached into his pocket again, brought out dozens of little chile peppers and gave me one. He seemed happy that I'd accepted it, and said I'd help assure that the picture would be a success. 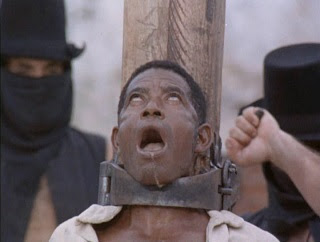 "I've since met other Italians who won't go anywhere without a charm in their pockets, but Gillo took superstition to cosmic heights. One of his friends told me that he always wore that overcoat whenever he directed the first shot of a new movie, and insisted that the same prop man be in the shot wearing the same pair of tennis shoes. He was the man who was strangled in the first scene, and the tennis shoes had been painted to look like boots. On Thursdays, I was told, you must never ask Gillo for anything because if he refused you it would bring him bad luck. He also never allowed the color purple to appear in his pictures, or for that matter anywhere in sight, because he considered it bad luck. His obession over color was limitless; if he could, he would have obliterated it from a summer sunset."
Posted by William Connolly at 9:11 PM