From LADD A HOLLYWOOD TRAGEDY by Beverly Linet 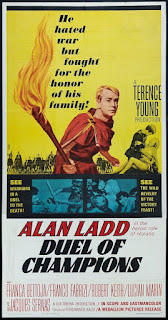 "On the last day of shooting his beloved dachshund pup Ciao, which he bought in Italy, suddenly died - which was one straw too many. A local socialite, Gilda Dahlberg, had planned a large cocktail party in Alan's honor, and he was finally persuaded to make a brief appearance, even if two hours late. Broadway columnist Earl Wilson, in Rome at the time and a guest at the party, recalls Alan mournfully telling him, 'Never fall in love' (with a dog).
"On March 23, Alan, Sue and Alana boarded the U.S. United States and gratefully sailed for home. Arriving in New York on the twenty-seventh and still bitter about the whole experience, Alan grimly told Hy Gardner of the Herald Tribune, 'It rained steadily for twelve weeks, and I broke my hand and hurt my knee in the dueling scene because of a peculiar Yugo custom - they don't believe in using wooden swords there, just steel.' (One reasonably suspects by now that he would have found a way to afflict himself if they'd been made of feathers.)
"Back in Los Angeles on April 1, he told Hedda Hopper, 'This has taught me a lesson. I'll only make pictures abroad for major American companies, but I'd rather make them here.' Hedda further reported that Alan had not yet received compensation for the picture, though the money was being cleared through an Italian bank, and that he had given the company an extra week without pay so they could finish the picture.
"He needn't have bothered. OJARIO, HORATIO, or DUEL OF THE CHAMPIONS - whatever the title - was trimmed from its projected running time of more than two hours to ninety-three minutes and then to a humiliating seventy-one. No major studio wanted to release it at any length or price. Eventually it was shown at the E.M. Loew Center Theater in Boston in August 1964, booked by little-known Medallion Pictures. The trade journal Motion Picture Herald reviewed it from Boston, noting that 'with any kind of exploitation endeavor on the community level [it] can be depended on for satisfactory grosses.' About Alan's performance, the Herald's critic observed kindly, 'Ladd impresses as the grim-visaged warrior.' (That wasn't acting.)
"Medallion, however, still found no buyers, and six months later, in February 1965, Allen Eyles' review in Films and Filming made sure the movie would never be bought. Eyles wrote that '...[the] film is a thoroughly indifferent spectacle, and there is little pleasure in watching [Alan Ladd] rather spent and ill-at-ease, reduced to playing a part for which he is many years too old in a setting that is cheap and familiar.' After this, DUEL OF CHAMPIONS vanished forever. It would not even be considered fodder for the 'Late Late Show' at three o'clock in the morning. However, Alan would be mercifully spared this knowledge..."
(Alan Ladd died on January 29, 1964 at the age of 50 of an accidental combination of alcohol and sedatives. DUEL OF CHAMPIONS, however, was resurrected thanks to home video and can rather easily be found on various DVD collections of Sword & Sandal films.)
Posted by William Connolly at 9:20 PM