More Conflict On The Set of BURN! 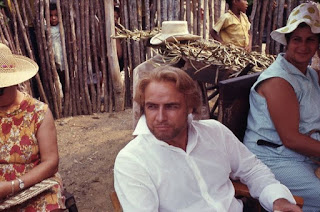 "Making that movie was wild. Everybody smoked a strong variety of marijuana called Colombian Red, and the crew was stoned most of the time. For some reason making a movie in Cartagena attracted a lot of women from Brazil. Dozens of them showed up, mostly upper-class women from good families, and they wanted to sleep with everybody. After they went home, some told me, they intended to see a doctor who would sew up their hymens so that when they got married their husbands would think they were virgins. The doctors in Rio must have made a lot of money from that movie.
"My truce with Gillo didn't last long. Although he raised the pay for the black extras and briefly gave them better food, I discovered after a few days that they were still not being fed the same meals as Europeans working on the picture. We were shooting scenes in a poor black village; the houses had mud floors and stick walls, and the children had distended bellies. It was a good place to shoot because it was what the picture was about, but heartbreaking to be there.
"'You can't feed these people that kind of crap,' I told Gillo. This time he ignored me, so I got everybody on the crew to pile their lunches against the camera in a pyramid and refuse to work.
"Gillo came up to me angrily with his team of thugs and said, 'I understand you're dissastisfied with lunch.'
"'Yes.'
"'What would you like to have for lunch?'
"'Champagne,' I said, 'and caviar. I'd like to have some decent food, and I'd like it served to me properly.' 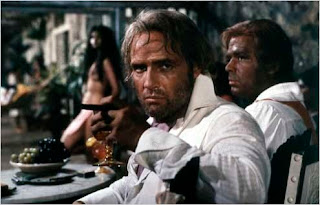 "Somewhere Gillo found a restaurant that sent my meal to the set, along with four waiters in red jackets with dickeys on their chests and napkins over their arms. When they set up a table with linen and silver and candles, I said, 'No, the candles shouldn't go there; they should go here, and the forks should go on the other side of the plates.' Then I touched the bottle of champagne and said it wasn't chilled enough. 'You'd better put it on ice a little longer.'
"I fussed with the table setting while the crew and people from the village gathered around to watch with their arms folded. In their eyes I must have been the epitome of the self-indulgent capitalist who wanted everything. Gillo sent a publicity photographer to take a picture of the event, and herded some black people into the background. After everything was arranged perfectly, I searched the crowd for the poorest, sickest, unhappiest-looking children I could find, invited them to sit at the table, and then served them the meal. The people cheered, but as far as my relationship with Gillo
was concerned, the episode made the situation worse."
Posted by William Connolly at 6:00 PM