Marlon Brando Takes An Unscheduled Vacation From The Set Of BURN! 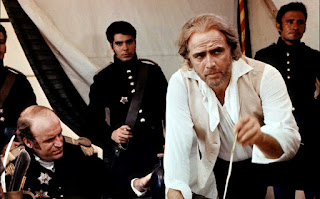 "We continued to fight while other problems came up: a key member of the crew had a heart attack and died; the cameraman developed a sty and couldn't do any filming; the temperature got even hotter, with all of us working long hours and flirting with sunstroke. The few union rules in effect were much more lenient than they were in the United States and everybody's temper was short. I also found it increasingly amusing that a man so dedicated to Marxism found it so easy to exploit his workers. Meanwhile, Gillo's superstitions knew no bounds. If somebody spilled salt, Gillo had to run around the table and throw more salt on the ground in a certain pattern dictated by him; if wine was spilled, he made the guilty party dip a finger in the wine and daub it behind each ear of everyone at the table. It was sad but hilarious. I began doing things to irritate Gillo, asking him for favors on Thursday, wearing purple and walking under ladders; once I opened the door of my caravan, shone a mirror on him and yelled, 'Hey, Gillo, buon giorno,' and then smashed the mirror. In Gillo's eyes breaking a mirror was a direct invitation to the devil to enter your life. Once he raised his glass at lunch in a toast and said, 'Salute.' I raised my glass while everybody drank, then pilled my wine with a flourish on the ground, which to Gillo was the supreme insult. He got a gun and stuck it in his belt, and I started carrying a knife. Years before, I'd practiced knife-throwing and was fairly accurate at distances up to about eighteen feet, so sometimes I took out my knife and hurled it at a wall or post a few feet from him. He shuddered slightly, put his hand on his waist, rested it on the butt of his gun and then eyed me sternly, letting me know that he was ready for battle, too.
"One day when we were having one of our arguments over how the movie should be played, I screamed at him at the top of my lungs, 'You're eating me like ants... you're eating me like ants.' I didn't even know it was coming out of me. It made him jump nine feet in the air. Another day, we came close to a fist-fight over a scene showing four half-naked black children pushing and pulling the headless body of their father - the man garroted in the first scene - home to be buried. Gillo shot part of the take in the morning, then adjourned for lunch. When I returned to the set afterward, he wasn't back yet and the wardrobe lady was holding one of the children in her lap.
"'What's the matter with the boy?' I asked.
"'He's sick.'
"'What is it?'
"'He vomited a worm at lunch, and he has a very high temperature.'
"'What's he doing here then?' I said. 'Where's the doctor?'
"She said Gillo wanted the boy to finish the scene because if he didn't he would have to find another child to play the part and lose part of a day's shooting.
"'Does he know he's sick?'
"'Yes.'
"I called the doctor and told him to get to the set as fast as he could. When he arrived I said, 'Take my car and get this kid to the hospital right now.' 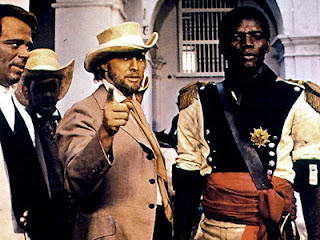 "When Gillo returned from lunch, I was steaming and so was he because I had sent the boy away. We came within inches of mixing it up; only the fact that he was shorter than me kept me from punching him. Several days later, I couldn't take Gillo or the heat anymore. I needed a vacation. People were dropping like flies from illness and exhaustion. I drove to Barranquilla and left for Los Angeles at four A.M. A day or two later, I got a stinging letter from the producers saying that I was in breach of my contract, and that unless I returned to Columbia immediately, they would sue me. I wrote back demanding an immediate apology for their preposterous accusations - all of which were true - and said I couldn't possibly think of returning after being so excoriated; my professional reputation was at stake. I knew the producers' threats were empty because I had learned long ago that once filming starts, the actor has the edge; too much money had been spent to abandon the project; and even if they could win a lawsuit it would take years to adjudicate, by which time all the money they'd invested on the project would be gone. If he knows what to do, the actor can get away with almost anything under these circumstances. Most of them are too intimidated to do anything, but I wasn't."
Posted by William Connolly at 3:28 PM