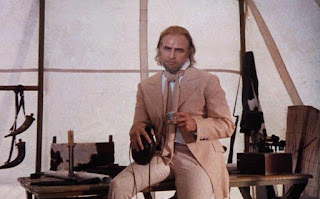 "After a five-day vacation and a letter of apology, I told the producers I would finish the picture, but only in North Africa, where the climate was more pleasant and the terrain and settings similar. They agreed, if I would just return to Colombia for a few more shots. I didn't want to see that country again, but I agreed to go. They booked me on a Delta Airlines flight from Los Angeles to New Orleans and a connecting flight from there to Barranquilla. When I walked onto the plane at Los Angeles International Airport, I asked the flight attendant, 'Are you sure this is a flight to Havana?'
"She opened the cockpit door and told the captain, 'We've got a guy out here who wants to know if we're going to Havana.'
"The captain said, 'Get him off the plane, and if he doesn't leave tell him we'll have the FBI here in two minutes.'
"'Oh, please,' I said, 'I'm awfully tired.'
"The flight hostess, who didn't recognize me, said, 'Get off the plane, buddy.'
"I was delighted because I was in no hurry to go back to Colombia, so I ran down the ramp at full speed to the concourse. As I sprinted past the check-in desk one of the agents said, 'Is there anything wrong, Mr. Brando?'
"'No,' I said out of breath, 'they just seemed a little nervous, and I don't want to have any extra trouble and worry on the flight.' Then I ran like a gazelle, expecting the agent to telephone the pilot and say, 'You just kicked a movie star off the plane.' Sure enough, an agent was waiting for me as I tried to sprint past the ticket counter.
"'Mr. Brando, we're awfully sorry,' he said. 'We didn't know it was you; please accept our apologies and go back to the plane. They're holding it for you.'
"'No,' I said. 'Not now. I'm terribly upset. I'm usually nervous about flying anyway, and if that pilot is so nervous I don't think I'd feel safe flying with him...'
"The story made the papers and the airline apologized, but it did give me a longer vacation because there wouldn't be another plane out of New Orleans for Barranquilla for three days. Unfortunately, they chartered a special plane to meet me in New Orleans and I had to return to Colombia after only two days.
"All of the above to the contrary, however, Gillo was one of the most sensitive and meticulous directors I ever worked for. That's what kept me on that picture because, despite the grief and strife, I had the deepest respect for him. Later, when I wanted to make a movie about the Battle of Wounded Knee, he was the first director I thought of to do it."
Posted by William Connolly at 8:41 PM