From: MY WORD IS MY BOND A Memoir by Roger Moore with Gareth Owen
(Under contract to Warner Bros., Moore appeared in the TV series The Alaskans and Maverick as well as the feature films THE MIRACLE, THE SINS OF RACHEL CADE and GOLD OF THE SEVEN SAINTS. When it became obvious that Warners wanted him to do another TV series, he asked to get out of his contract.)

"I had a business manager at this point, Irving Leonard, who was also Jim Garner's manager. In fact, he handled most of the people who had been under contract to Warner's, and also Clint Eastwood. In fact it was he who persuaded Clint to go to Italy to do a picture for $15,000, which was a lot less than he was used to being paid in Hollywood. That was THE GOOD, THE BAD AND THE UGLY, the first of the Sergio Leone spaghetti westerns, which led to Clint becoming one of the biggest motion picture stars."

(There are a couple of problems with this paragraph. Clint didn't go to Italy until 1963; Roger went in 1961, so Clint's success had nothing to do with Roger's trip. Also, Clint's first movie with Sergio Leone was A FISTFUL OF DOLLARS. THE GOOD THE BAD AND THE UGLY was the third movie Clint and Sergio made together.)

"I had a certain profile in Italy by this point, and so when I was offered the lead in an Italian picture, Irving encouraged me to take it; even though the money wasn't brilliant. So I left Hollywood behind me, again, and departed for Rome to make THE RAPE OF THE SABINE WOMEN or IL RATTO DELLE SABINE, as the natives say.
"I received the script for SABINES, one of the scripts I should say, as many different language versions existed to accommodate the real Heinz 57 nationality mix of all the actors involved: English, French, German, Yugoslav, Italian and the rest. The film was about the founding of Rome, the story of Romulus and Remus. I was to play Romulus. Casting a blond, blue-eyed Anglo-Saxon as the twin of Remus, raised by a wolf and becoming the founder of Rome, seemed somewhat ambitious to me. However they were paying, so I said nothing." 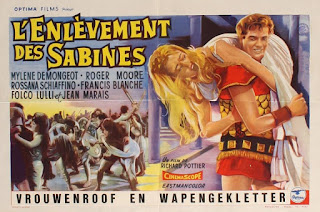 Posted by William Connolly at 9:39 PM