Roger Moore on the first day on SABINES. 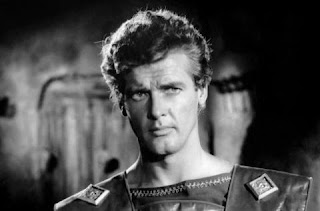 "Our first assistant director was a lady called Beka. Never content with instructing the crowd and extras before calling 'Action', she would continually shout instructions, in her local dialect, at them during the scene and all over my and the other principal's dialogue. I found it very off-putting, but when I challenged her as to why she did this she replied, 'Because they are stoopid.'
"'I may be stupid too,' I replied, 'but I find it very hard to concentrate.'
"Anyhow, my first scene was with Mylene Demongeot, who spoke her lines in French. As soon as her lips stopped moving, I chipped in with, 'You mustn't be afraid, we mean no harm.' She then replied in French about all men being liars and, again as soon as her lips stopped moving, I knew it was my turn. We managed to get through some of this, with Beka continually shouting her Serbian directions in the background, when a man in the crowd wearing a white toga emerged and punched me squarely in the jaw; knocking me flat on my back.
"'Cut! Cut!' called the director. 'Roger, where are you?'
"'Here on the floor.'
"'Why are you on the floor?'
"'Because that man just punched me,' I replied.
"'Beka! Why did that man punch Roger?' the director asked.
"'Because he is drunk,' was her reply.
"'Hang on,' I chimed in. 'He should be fired if he's drunk.'
"'No,' said Beka. 'He's acting drunk.'
"'Look, we normally discuss and rehearse things like this,' I said, 'so I'm prepared for someone to hit me!'
"We broke off for lunch... with a lot of red wine. Then Pottier said, 'In this next scene you gallop in, your horse stumbles, you fall off your horse and then get up and pull your sword - '
"'Hang on!' I cried. 'I come riding in and then we cut to a double falling off the horse.'
"'Ce qui? Un double? Je ne comprends pas.' All of a sudden, Pottier didn't speak English any more.
"At first I didn't quite understand why my agent had specifically listed in the contract that I should have a dressing room, make-up and costumes supplied, as that was the norm I had come to expect. He's also specified that a double should be available for stunt work. My agent was obviously wise to how Italians made movies. I reminded Pottier of this. He called Beka over, and they mumbled something between them. She then pulled a chap out of the crowd and said to me, 'Take you clothes off.'
"'What?' I asked.
"'Take your clothes off. If he is to double you, he needs your clothes.'
"'Oh no. On ho! If he is to double me, then you will make clothes for him,' I replied. It was an ordeal. And that was only the first day."
Posted by William Connolly at 5:50 PM