From: MY WORD IS MY BOND A Memoir by Roger Moore with Gareth Owen
(After starring in the Warners Bros. TV series The Alaskans, Moore was cast on Maverick as Brett's English cousin, Beau.)
"Again, we had some lovely guest stars and when Lee Van Cleef was appearing in a episode my parents came to visit. It was their first visit to Hollywood, and quite an eye-opening experience for two ordinary folks from south London. My mother, in particular, was a huge Western fan, and Lee Van Cleef was one of her favourite actors. So to be in Hollywood, on a Western set, meeting Lee was a thrill and a half." 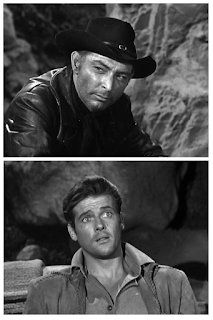 Posted by William Connolly at 9:17 PM