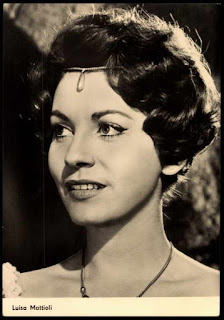 "Folco Lulli was playing King Titus, and was always complaining about the cheap production. I remember we were in the back of a car together going to location one morning, and he was chattering away in Italian - and even though I spoke very little, I got the drift of what he was saying and it was none too complimentary. Just then he hacked phlegm from the back of his throat and spat it out of the window. Which would have been fine had the window been open. I was in hysterics.
"As our shoot progressed on location, the beautiful Luisa Mattioli and I became more than just members of the cast. We were both away from our native lands and, as I said, language was not barrier. In fact we enjoyed many long conversations during which it didn't seem to matter whether the words made any sense whatsoever. I found out that a nod is, indeed, as good as a wink.
"We somehow managed to complete the film and I have to say that the finished thing was really quite horrendous. Had my payment been forthcoming on time, it might have eased my disappointment and frustration. Eventually I did get paid, but only, I suspect, because Bomba wanted to offer me a second picture, NO MAN'S LAND. Of course he dangled the fact that Luisa would again be co-starring, and as I wanted to stay on in Rome with her, it suited me. Our romance was developing and our feelings for each other growing stronger; soon we became quite inseparable. 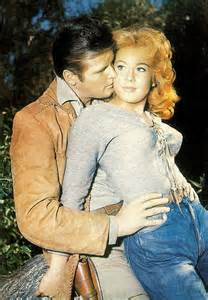 "In another wonderful bit of casting, I was to play an Italian soldier, a deserter. Max Schell's brother, Carl, played a Nazi villain and our leading lady was Pascal Petit. It was all haphazardly stitched together by director Fabrizio Taglioni. One wonderful actor who had a small role in the film was Memmo Carotenuto. He had a nose that didn't quite know which direction it should be pointing in. By this point I had picked up a little more Italian and was able to converse, so I asked how his nose had become broken in such a fashion. He said he had been playing Jesus in a production, and for the crucifixion he was tied to the cross, which was erected on top of a hill. All of the extras fell to their knees to worship Christ in his dying moments. The vibrations caused the cross to sway, but as he didn't want to draw too much attention and spoil the shot, he quietly called, 'Help me, help me!' The extras must have thought it was part of the script, so did nothing. At which point the cross fell forwards, and with him being tied he had nothing between himself and the rapidly approaching ground except his nose - which duly took the brunt of the impact.
"Lack of communication and a bad script led to friction on the set. It wasn't a happy production. I wasn't in a position to turn the work down however, and so had to make the best of it. Mercifully I didn't have to think about a third Italian epic, as I received word from Britain about a new TV series that they wanted me to star in.
"...My Italian films had certainly not catapulted me to international superstar status, as Clint Eastwood's did him, and, Luisa aside, I wasn't sure how much longer I wanted to spend in Italy pursuing a career in, shall we say, somewhat unremarkable films."
﻿(It took years before Roger Moore's second wife, Dorothy Squires, granted him a divorce and he married Luisa. When they married in 1969, they had already had three children.)
Posted by William Connolly at 5:39 PM