"I flew from LA to London, and then on to Paris to meet the producers, Enrico Bomba being the Italian one, and Alexander Salkind the French partner (Alex, and his son Ilya, went on to producer SUPERMAN among other films). After lunching with Alex, we walked along the Champs-Elysees - Alex lived just off the famously expensive thoroughfare, very near the lavish George V Hotel - and as we passed a tailor's Alex said, 'Just a minute.'
"He took me in with him and addressed the tailor in French; I gathered he said something about making a major movie, me being the star and that he wanted me fitted out. The tailor, obviously registering that this could be a very lucrative opportunity, wrote down all my measurements. Alex thanked him for his kind attention, picked up the measurements, and we walked out of the shop. He then called Rome and gave them my measurements to make my costumes - which were really just togas in any event. Maybe Alex's methods should have warned me how cheap this production was going to be!
"I next flew to Rome for fittings and met some of the cast and crew. Richard Pottier was our director; he was Hungarian-born but had spent much of his working life in France. Mylene Demongeot was our French leading lady, Rea. Schilla Gabel was the Italian leading lady, Dusia. Then there was a very beautiful young lady named Luisa Mattioli, who was under contract to Enrico Bomba. Luisa was to play Silvia.
"While we were in Rome, a press conference was set up for Italian television and Luisa, who had previously been a TV presenter in Italy, was asked to interview me. As I spoke no Italian and she spoke no English, it was an interesting interview, as you might imagine. I still don't really know how we got through it, but we did. We seemed instantly able to communicate - language was no barrier between us.
"I was fitted for my costumes and then we were shipped off to Zagreb in Yugoslavia. It wasn't a film studio, but a sort of converted warehouse, all very makeshift; and I felt rather lonely, as one of the few English-speaking people around the place. The first day's shooting was upon us. The Romans, under the leadership of your truly, rode into the Sabinian's town with plentiful supplies of wine to get the menfolk drunk. Once they were incapacitated, the Romans carried the Sabine women off for the inevitable rape. The big problem was that my French was not very good; my Italian was non-existent and as for my German and Serbian, well, you can guess. Everyone was speaking in their own native language and it was chaos." 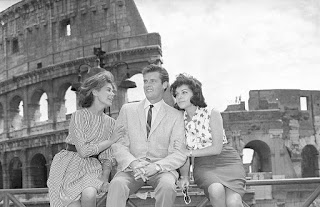 Posted by William Connolly at 8:33 PM